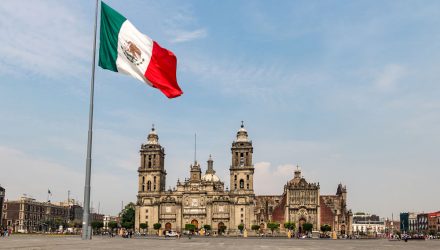 Marveling at the Mexico ETF, Up 27% YTD

The iShares MSCI Mexico Capped ETF (NYSEArca: EWW), the largest ETF dedicated to Mexican equities, is one of this year’s best rebound stories as highlighted by a year-to-date gain of 27%.

That is good enough to make EWW one of the best-performing ETFs tracking a Latin American economy. EWW tries to reflect the performance of the MSCI Mexico IMI 25/50 Index, which does not hedge its currency risks.

“As for EWW, puts accounted for nine of its top 10 most popular options on Tuesday. Of note, buy-to-open activity was detected at the weekly 9/29 54.50 put, suggesting traders are expecting the shares to pull back by next Friday’s close, when the weekly contracts expire,” according to Schaeffer’s Investment Research.

Still, this may not be the best time to be getting bearish on EWW. Year-to-date, the largest peak-to-trough drawdown for EWW is just 5.1%. EWW’s three-year standard deviation is 17.9%.

“However, it’s seemingly not the best time to be buying to open puts. For instance, the ETF has a 30-day implied volatility skew of 22.9% is only 15 percentage points from a 12-month high, revealing near-term puts have rarely been more expensive over the past year, relative to calls,” according to Schaeffer’s.