You are at:Home»Equity ETFs»Markets Undeterred as Trump and Iran Exchange Threats 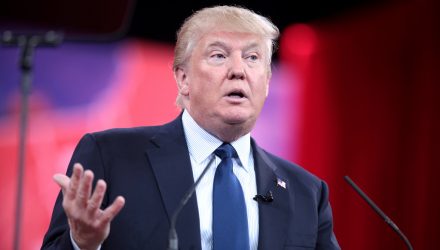 It’s been well-documented, particularly with regard to trade, that when U.S. President Donald Trump speaks, the markets can move, but that wasn’t the case today as the markets moved on undeterred despite all the major indices beginning in the red.

On Sunday night, President Trump posted a tweet in response to Iranian President Hassan Rouhani warning the U.S. president that pursuing hostile policies against Tehran would bring about “the mother of all wars.” As expected, this prompted a response from President Trump via Twitter.

To Iranian President Rouhani: NEVER, EVER THREATEN THE UNITED STATES AGAIN OR YOU WILL SUFFER CONSEQUENCES THE LIKES OF WHICH FEW THROUGHOUT HISTORY HAVE EVER SUFFERED BEFORE. WE ARE NO LONGER A COUNTRY THAT WILL STAND FOR YOUR DEMENTED WORDS OF VIOLENCE & DEATH. BE CAUTIOUS!

Much of the tension stems from President Trump pulling the U.S. out of a nuclear deal that was struck when former president Barack Obama was still in office. Adding fuel to the flame was the U.S. warning crude buyers purchasing Iranian oil to scale back their purchases to zero or face tough sanctions.

As of 11:40 a.m., the Dow Jones Industrial Average was down 17 points, the S&P 500 and NASDAQ were both up 0.6%. This week, earnings reports continue as second quarter results published thus far have come in strong by a majority of companies.

This week will bring earning reports from the likes of Intel Corp, Advanced Micro Devices Inc, Ford Motor Co, General Motors Co,  Facebook Inc, Twitter Inc, McDonalds Inc, Chipotle Mexican Grill Inc, and a host of others. According to Nick Colas of DataTrek Research, more of the same should be expected this week.

” Q2 is coming in strong, and this week should continue that trend. Earnings season has a habit of sucking up most of the market’s attention, which is a positive when trade war chatter is the competing narrative,” said Colas. “We just wish analysts would pop their Q3 numbers sooner rather than later.”