You are at:Home»Portfolio Construction Channel»Trump Takes Shots at Fed Regarding Monetary Policy 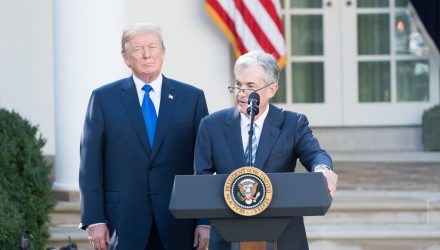 U.S. President Donald Trump took aim at the Federal Reserve last Friday, using Twitter as a sounding board to voice his criticism regarding the Fed’s monetary policy that hints at more interest rate hikes to come.

Trump’s comments come as Federal Reserve Chairman Jerome Powell gave his semiannual testimony to Congress regarding the current state of the economy, which is humming along in terms of expansion and growth.

It’s the latest round of oral artillery after President Trump sounded off on the Federal Reserve in a CNBC interview on Thursday, saying that the Federal Reserve’s actions could send negative reverberations throughout the economy. Nonetheless, he seemed content to simply allow the Fed to do its job.

“I’m not thrilled,” said Trump. “Because we go up and every time you go up they want to raise rates again. I don’t really — I am not happy about it. But at the same time I’m letting them do what they feel is best.”