You are at:Home»Equity ETFs»Markets Undecided Ahead of U.S.-North Korea Talks 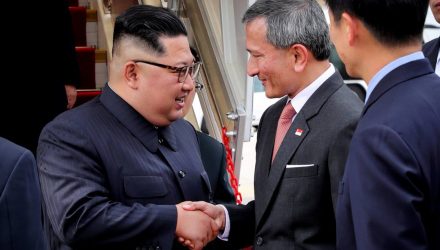 The financial markets are fickle ahead of U.S. talks with North Korea on Tuesday in Singapore. At noon Eastern on Monday, The Dow Jones Industrial Average was up 0.1% while the S&P 500 is up 0.34% as speculation remains on how well the meeting goes with U.S. President Donald Trump and North Korean leader Kim Jong-un.

President Trump and North Korean leader Kim Jong-un hope to ease tensions between the U.S. and North Korea with a historic meeting that will cover topics, such as the denuclearization and sanctions relief. A boost to both Chinese and U.S. equities will certainly be a byproduct of a successful outcome.

While these signs point to early optimism, it remains to be seen whether the meeting proves to be a success or failure. As such, the market remains noncommittal.

Related: As North Korea Summit Nears, Is China a Threat?