You are at:Home»Video»As North Korea Summit Nears, Is China a Threat? 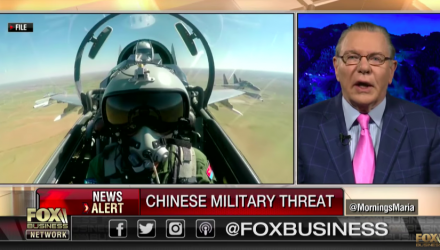 As North Korea Summit Nears, Is China a Threat?

Next Tuesday, President Donald Trump will meet North Korean leader Kim Jong Un in Singapore. But as the historic June 12 summit approaches, some political commentators are looking to whether the U.S. is on a collision course with China.

Retired American General Jack Keane appeared on Fox Business Network on Tuesday to discuss the upcoming summit and why he thinks China is a threat to the U.S.

“The real, main element of the meeting has to got to be an agreement for a process going forward that actually leads to complete denuclearization,” said Keane, who is a Fox News senior strategic analyst.

Such an agreement, as per Keane, should include details of the locations of North Korea’s missile locations and research sites that would be verified by both U.S. and international inspectors. Additionally, Keane said that the U.S. should refrain from lifting economic sanctions upon the country “until actual dismantling of the nuclear program is underway.”

While the unprecedented meeting between President Trump and Kim Jong Un may serve as a beacon of hope for nuclear peace, China’s rapid global militarization sparks new concerns. With its continued development of artificial islands in the South China Sea and its recently opened naval base in Djibouti, Africa, Keane says that [the U.S.]  “is actually on a collision course with China,” as Chinese President Xi Jinping hopes to gain “geopolitical advantage over [U.S.] allies in other countries through continued militarization, infrastructure, and energy development.”