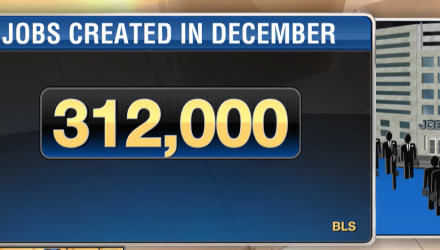 The three major indexes ticked slightly higher on Monday after U.S. President Donald Trump said that talks with China on a trade deal were progressing and that weakness in the country’s economy is paving the way towards a resolution.

The Dow Jones Industrial Average was up over 50 points after rising over 700 points in last Friday’s surge. The Nasdaq Composite gained just under one percent, while the S&P 500 ticked just under 15 points higher.

Last Friday, markets soared as job growth surged to 312,000 during the month of December, handily beating economists’ expectations of 176,000 nonfarm payrolls added. The data caps off what’s been a rough start for the capital markets in 2019 amid global growth concerns.

“The January effect will likely continue, but the market will be erratic as the trade talks continue,” said Peter Cardillo, chief market economist at Spartan Capital Securities. “The real key is trade. Any sign that trade talks are going well could send the market to the upside.”

The markets were also sent higher on Federal Reserve Chairman Jerome Powell saying that the central bank will exercise more patience with respect to raising interest rates. The Federal didn’t show much dynamism in 2018 with respect to monetary policy, obstinately sticking with a rate-hiking measure with four increases in the federal funds rate.

That appears to have changed given the current economic landscape, and especially in the capital markets as Powell is now preaching patience and adaptability.

“As always, there is no preset path for policy,” Powell said. “And particularly with muted inflation readings that we’ve seen coming in, we will be patient as we watch to see how the economy evolves.”