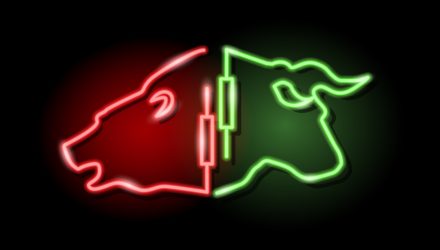 U.S. markets are in the red on Friday after a sizable selloff Thursday that attempted a failed recovery. The World Health Organization showed that the tally for new coronavirus cases has escalated again, generating fears that a pronounced global economic slowdown is in the works.

Major stock index ETFs echoed the fall in equities, with the SPDR S&P 500 ETF Trust (SPY) falling roughly 1% before recovering a bit, while the SPDR Dow Jones Industrial Average ETF (DIA) fell 0.9%. The Invesco QQQ Trust (QQQ) which had been holding up the best until recently is down the most with a 1.35% loss today, after a precipitous fall from fresh highs yesterday.

Friday’s losses target the major averages for their first weekly losses in three weeks. The Nasdaq is down roughly 3% from its highs, while the Dow and S&P 500 are both down at least 2% from their recent highs.

Meanwhile, volatility is once again exploding after a lull, with the CBOE Volatility Index (VIX), known as the “fear index”, running up from 13.35 to 18 in just a few days, as stocks have fallen. The coronavirus could be the trigger that has put fear into markets, although coiled volatility or compression often leads to a dramatic selloff.

“The VIX follows some very specific patterns that show compression,” Henrich said last year on CNBC’s “Trading Nation.” “If you look back to, let’s say, the last few years, we’ve seen a large compression pattern from 2016 to 2017.”

“When that energy compresses too much, then we see these spikes,” the strategist said. “We have seen these spikes with quite a bit of regularity, but they always need some sort of trigger.”

China’s National Health Commission released news that there are more than 75,00 confirmed cases of coronavirus and over 2,000 deaths on the mainland. An additional 800 new cases were reported in China overnight. South Korea reported 52 new cases on Thursday to take its total to 150.

“Even if the outbreak recedes, global growth is still set to fall to zero in the first quarter, before bouncing back over the remainder of the year,” Peter Berezin, chief global strategist at BCA Research, said in a note. “Thus, a near-term hit to corporate earnings now looks unavoidable.”