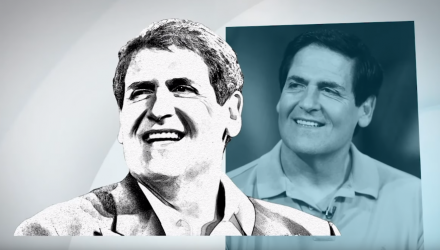 Mark Cuban‘s father, who worked at an auto upholstery shop, was extremely hard-working according to Cuban, and taught the billionaire entrepreneur many of the lessons that he incorporates in his own life.

In an interview with Yahoo Finance, Cuban explained how much of his focus and success came from a mindset he learned from his father.

“I mean my dad busted his ass. He worked six days a week, left at seven or 730 in the morning and got back at 6 or 7 o’clock. He lost his eye due to an accident in upholstery. He had a staple break while he was putting some covering on a car seat. You know it was a middle-class upbringing. My mom did odd jobs. You know they just wanted something better. My grandparents came over from Russia. And you know, my dad was the first generation and my uncles were the first generation like my mom too. And like every child they just wanted something better for their kids,” Cuban said.

The billionaire, Dallas Mavericks owner, and Shark Tank investor says that outworking others and being engrossed in business when others weren’t is what allowed him to achieve such monstrous success.

“I think, you know, everybody’s got something that they’re good at and the hard part is just finding it. I found out early that I was a good sales person and that I really like business. You know like I like sports. I mean, I read everything I possibly could and played sports as much as I could. But I just wasn’t as good as I wanted to be. And business was the same way. For as far back as I can remember I was buying and selling baseball cards, garbage bags, whatever I can find, stamps for collectors. But I was also reading everything I could. I was that an usual kid. I would rather read about Ted Turner then go to the movies. And so I think I created a foundation….I had my ups and downs of course, but I think I just that I put in the time and was fortunate enough to really get excited about business. And that paid benefits in the long haul,” he explained.

Cuban also describes how he is constantly focused on expanding his knowledge base, and learning is an ongoing goal of the business magnate.

“There’s always something new, and most people just aren’t putting in the time to learn it,” he added.