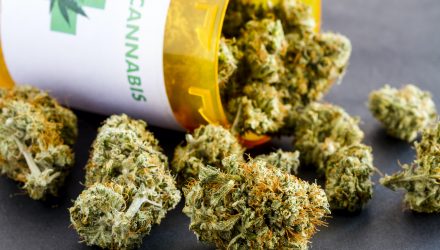 Cannabis related ETFs have been on fire recently, and their outperformance has continued to start the month of March.

Last week the AdvisorShares Pure US Cannabis ETF (MSOS) announced it had gathered over $1 billion in assets. The fund was up 2.2% Monday morning amid the news.

The AdvisorShares ETF is the first of its kind to focus on U.S. cannabis equities. That’s beneficial seeing that the U.S. is the fastest-growing marijuana market in the world.

“When it launched on September 2, 2020, the actively managed MSOS became the first U.S.-listed ETF focused solely on American cannabis companies, including multi-state operators (MSOs),” according to AdvisorShares. “MSOs are U.S. companies directly involved in the legal production and distribution of cannabis in states where approved. This ETF with its apt ticker seeks long-term capital appreciation by investing entirely in legal, domestic cannabis equity securities. Its domestic equity strategy allows MSOS to allocate its underlying portfolio among MSO companies as well as other U.S.-based cannabis-focused areas such a REITs, cannabidiol (CBD), pharmaceutical and hydroponics. MSOS launched with $2.5 million in assets and has since grown to over $1 billion in assets less than six months after its inception.”

Cannabis ETFs have been buoyed by optimism that there will be additional marijuana deregulation. MSOS has gained 34% year-to-date, while THCX surged 64% and POTX exploded 74%.

Even the ETFMG Alternative Harvest ETF (MJ), which was the first ETF to reach the $1 billion mark, now holds $1.9 billion under management, according to FactSet. The fund gained over 4% Monday.

Robust earnings from individual cannabis companies such as producer Tilray, which has gained a massive 207% so far this year, are also helping to generate optimism about marijuana stocks and their potential for significant global growth. Meanwhile, Tilray’s merger/acquisition target, Aphria, exploded 172% in the same time period.

Like GameStop and silver futures, which were also the recent target of social media retail traders, it’s also been reported that marijuana stocks have been boosted by social media traffic and Reddit trading boards, where cannabis is a popular subject.

Despite all the fanfare, there are still some concerns about owning these ETFs, according to analysts. Even some ETF managers are suspicious of the dramatic moves in pot ETFs.

“In recent months, Canadian [cannabis]stocks have traded in a way that doesn’t make sense. They have traded on false optimism, on hype and on misinformation,” said Dan Ahrens, chief operating officer and portfolio manager at AdvisorShares, the largest marijuana ETF provider by assets.

Nevertheless, the backdrop for marijuana ETFs is generally positive.