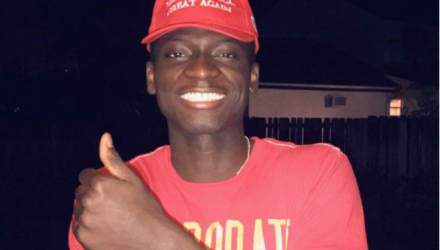 A black man was attacked at a Cheesecake Factory for wearing a “Make America Great Again” hat. The incident took place Sunday when 22-year-old Eugenior Joseph was dining with his girlfriend’s family and a woman employee of the outlet walked up to him, pointed at his MAGA hat and signaled more employees to look him over.

According to International Business Times, “A witness said they had no clue of what was happening, and the employee’s finger was on top of the victim’s head while the waitors were threatening to beat him up including saying things out loud like: ‘I’m going to knock his head in so hard his hat is going to come off.”

Clearly there is a lot of mixed emotions when people encounter the Make America Great Again slogan.

For some it represents a “greater” America but for others, it represents bigotry, racism, pain, and values that they don’t agree with.

So what comes up on Twitter when you enter the #MakeAmericaGreatAgain hashtag?

I will be voting for President Trump, again, in 2020. The democrat party does not represent any American values. #MakeAmericaGreatAgain

Of course, Donald Trump saying he will be voting for himself…

Meet Kai! The backyard is his Oval Office and the stump is his throne! #MakeAmericaGreatAgain pic.twitter.com/mEyFdY2jAL