You are at:Home»Equity ETFs»Looking to Thailand for a Hot Emerging Markets ETF 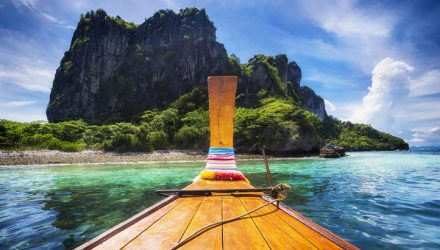 Looking to Thailand for a Hot Emerging Markets ETF

Although it trails the MSCI Emerging Markets Index on a year-to-date basis, the iShares MSCI Thailand Capped ETF (NYSEArca:THD) is still higher by nearly 10% this year. THD’s gain of 2.5% over the past week could be a sign the Thailand ETF is set to deliver more near-term upside.

While some observers may believe Thailand is still rife with political volatility, especially after the military took control last year, Thailand’s economy and incomes have historically expanded faster and remained more stable under the three times the military led government, compared to the nine civilian ones.

“The second largest economy in Southeast Asia (ASEA), Thailand, saw impressive growth in 1Q17 with the support of external demand and public investment. Thailand’s (THD) GDP rose 3.3% in 1Q17 as compared to a 3% rise in 4Q16,” according to Market Realist.

The $391.3 million THD, which debuted more than nine years ago, tracks the MSCI Thailand IMI 25/50 and holds 130 stocks. The ETF allocates 21.7% of its weight to financial services stocks and a combined 28% is allocated to the energy and industrial sectors.