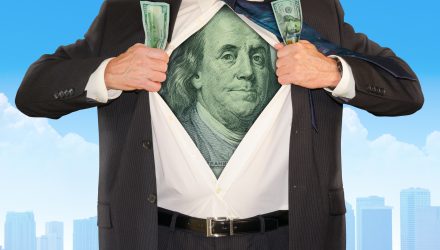 Look to Small-Cap ETFs as Strong USD Weighs on Earnings

While a strong U.S. dollar weighs on corporate earnings for large multinational companies with big overseas footprints, small-cap stocks and related ETFs may continue to outperform with the U.S. economy continuing to chug along.

The outperformance in small-caps may continue as a stronger U.S. dollar weighs on larger companies that have overseas businesses. About half of the first 23 S&P 500 firms that posted results for Q2 as of Friday warned that currency swings either had a negative impact on earnings or revenue or were expected to become a headwind in the coming months, reports Akane Otani for the Wall Street Journal.

Tough Period Ahead for Currency Risk?

While it’s still early, the warnings about currency risk, notably a stronger greenback, indicates multinational firms could face an increasingly tough period ahead. S&P 500 companies previously generated one of their strongest quarterly earnings, partly due to a depreciating U.S. dollar – the weaker dollar benefits large-cap U.S. multinationals by making exports cheaper to foreign buyers and also causing overseas profits to look bigger when converted back into USD.

“As we head into the earnings season, the thing we’re going to be concerned about is what might cause guidance to be conservative. One clear concept would be trade policy. But the second and more current would be the dollar,” Art Hogan, chief market strategist at B. Riley FBR, told the WSJ.

Nevertheless, the markets are expected to continue to reveal strong corporate earnings. According to FactSet, S&P 500 companies are projected to grow earnings in the second quarter by 20% year-over-year, potentially marking the second fastest pace of earnings growth since the third quarter of 2010. Additionally, 89% of companies that have reported also revealed stronger-than-expected earnings so far.