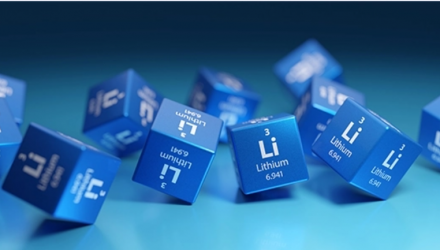 Lithium Was The Best Performing Commodity For The Second Straight Year

At the beginning of each year, we update our ever-popular Periodic Table of Commodity Returns, which is fully interactive and includes 10 years’ worth of data. A pdf of the table is also available for download.

Long-time fans will notice a new inclusion to this year’s table: lithium. The soft, silvery metal, an increasingly important and sought-after material used in the production of batteries, topped the list of best performing commodities for the second year in a row.

Lithium may not be a household-name metal like gold and copper, but that’s changing fast. After skyrocketing 442.8% in 2021, prices for “white gold” ended 2022 up 72.5% as electric vehicle (EV) sales continued to account for a larger share of total vehicle sales around the world. Many countries have plans in place to phase out internal combustion engine (ICE) vehicles by the end of this decade or next, and California—among the world’s top 10 largest auto markets—became the first U.S. state to set a goal of 100% EV sales by 2035.

Sales of EVs are expected to continue growing in 2023, though at a slower pace. S&P Global estimates that 3.3 million units will be sold, compared to 3.6 million last year. Short-term headwinds may include reopening challenges in China as well as higher borrowing costs in the U.S. and Europe. Nevertheless, the firm remains optimist of future EV demand, which should increase consumption of lithium and other critical metals.

The Conflict In Ukraine Catapulted Energy Into The Top Spot

With the exception of coal, fossil fuels had a standout year, with natural gas rising approximately 20% and crude oil 6.7%. This was due largely to supply-demand disruptions caused by Russia’s invasion of Ukraine and the energy crisis that resulted in Europe.

Looking ahead, I wouldn’t count oil out just yet. UBS estimates that global crude consumption will grow by 1.6 million barrels per day (mbpd) in 2023, which would surpass the record of 103 mbpd.

Demand will primarily be driven by emerging Asian countries, China in particular, according to UBS. The country’s long-awaited reopening should spur oil demand to exceed 2019 levels and hit a new all-time high in the second half of 2023.

And then there’s jet fuel, which UBS says will see the fastest demand growth among oil products in 2023, due to China’s recent announcement that incoming air passengers are no longer required to quarantine. As I shared with you recently, shares of Asian airlines have surged on the news.

China has long been the leading consumer of a number of commodities and raw materials, and the country’s reopening, three years in the making, makes me incredibly bullish. What’s more, China’s government has recently pledged new spending to meet its 2030 goal of renewables accounting for 25% of its total energy consumption.

Recent U.S. legislation is also constructive. To boost domestic supply of EV-grade lithium, nickel, graphite and other critical metals, the Biden Administration doled out nearly $3 billion to U.S. companies in October. Further awards and grants will be forthcoming as part of the Bipartisan Infrastructure Bill, signed in November 2021, and Inflation Reduction Act (IRA), signed in August 2022.

Despite the good news, commodities remain an underinvested asset class, according to a December report by Goldman Sachs. Encouragingly, bank analysts write that the setup for most commodities this year “is more bullish than at any point since [they]first highlighted the supercycle in October 2020.”

Goldman forecasts that commodities, as measured by the S&P GSCI, will return 43% in 2023. That would mark the third straight year of gains, something the asset class hasn’t achieved since the period from 2002 to 2005.

But why the underinvestment? Simply put, market participants are positioned for a recession. In 2022, tens of billions of dollars were yanked out of commodity mutual funds and ETFs.

It’s not hard to see why. Manufacturing strength, as measured by the JPMorgan Global Manufacturing PMI, declined for the fifth straight month in December to the lowest point since the first half of 2009. Of the 29 nations for which data was available, only seven—India, the Philippines, Russia, Mexico, Colombia, Indonesia and Australia—reported expansion in the manufacturing sector last month.

Only time will tell, but there’s reason to believe that recession fears are overblown. Again, China is reopening, and Europe appears to be recovering after its energy shock. Believe it or not, European stocks outperformed U.S. stocks in 2022. Right now, investors are betting that in slower rate hikes in the U.S.

If this is the case, these are all positives for commodities, and now may be an opportunistic time to get exposure.

Goldman believes copper is well positioned to benefit the most over the long term due to its higher usage in renewable energy technologies. I agree, and numerous times I’ve written about why we like the red metal, with Ivanhoe Mines being our favorite copper play. This week, Ivanhoe shared outstanding production results for 2022, reporting that production increased 215% year-over-year at its 40%-owned Kamoa-Kakula Mining Complex in the Democratic Republic of Congo.

The S&P GSCI Total Return Index is widely recognized as the leading measure of general commodity price movements and inflation in the world economy. The index is calculated primarily on a world production weighted basis, comprised of the principal physical commodities futures contracts. The Global Manufacturing PMI is compiled by S&P Global from responses to monthly questionnaires sent to purchasing managers in survey panels in over 40 countries, totaling around 13,500 companies. These countries account for 98% of global manufacturing value added.

Holdings may change daily. Holdings are reported as of the most recent quarter-end. The following securities mentioned in the article were held by one or more accounts managed by U.S. Global Investors as of (12/30/22): Ivanhoe Mines Ltd.