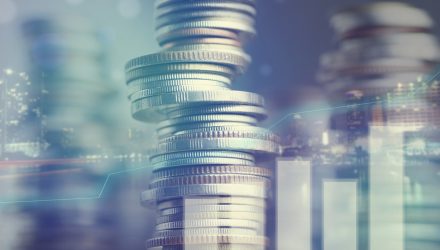 What Do Experts Believe This Divergence Means for Stocks, ETFs?

Ian Young October 16, 2019
With earnings season off to a strong start and markets moving up handily once again this week, stocks are now up nearly 20% this year, close to all-time highs, yet earnings growth is expected to be insignificant. Is it possible that the market can keep rallying further or is it more likely we will see a selloff or respite?
“In any given year we can have these divergences take place but usually not to this degree,” said Matt Maley of Miller Tabak on CNBC. “I mean you saw in 2015, where we had an earnings recession. Earnings went down, and the stock market was flat. Well this year we have earnings that are flat and may end up being down, but the stock market is up 20%. That’s quite a divergence. You very rarely get that kind of divergent that last very long. We had to a small degree in 202, and we definitely had it back in 1997, when the market continued to move higher. But that of course was in the middle of a bubble. So unless you’re really looking for a big bubble here going forward, it’s kind a hard to be bullish.”
While Maley believes that the market may be overcooked currently, he is not necessarily expecting any dramatic downswing, at least not prior to the election next year.
“That doesn’t mean we have to have a correction or a recession or anything like that, but I do think it means that between now and at least the next year of the election next year, stock-picking and group picking is going to be the main priority. And unless earnings really pick up in a material way, which doesn’t look like is gonna happen, I don’t think we can just be the passive investor that has worked well for investors in the last decade or so,” said Matt Maley.
Other experts see the market as easily able to continue it’s upward trajectory, given that the trade war headlines seem to have abated somewhat.
“It’s all about what non-QE, that’s really QE, that were getting from the Fed, and you can’t fight the Fed. We’ve been cautious because valuations are stretched, but I think with what looks like China trade is at least not a daily headline for the time being, that’s allowing the market to breathe a sigh of relief as we’ve been seeing. We’re getting good news out of the banks, And that’s certainly an attractive space. But I think going into this earning season, and future, bulls really have it. Because if we have continued negative earnings, they’re going to be easily explained away with the uncertainty. And if that uncertainty is not going away, well then there’s going to be this optimism,” said Quint Tatro of Joule Financial.
While there is much debate about where the markets are headed, if the stocks are poised for more gains, traders can take advantage with leveraged S&P 500 ETFs, such as the Direxion Daily S&P 500 Bull 2X ETF (NYSEArca: SPUU), Direxion Daily S&P500 Bull 3X ETF (NYSEArca: SPXL) while the Direxion Daily S&P 500 Bear 1X ETF (NYSEArca: SPDN) can be used for pullbacks and selloffs.
For more market trends, visit ETF Trends.