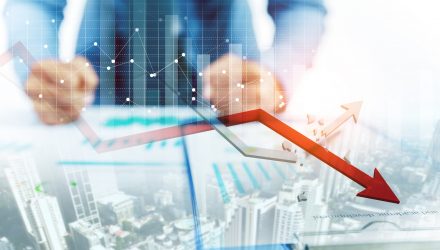 Second-quarter earnings will kick off in the middle of July, but it could be the bears rejoicing, which could put inverse exchange-traded funds (ETFs) in play, especially those looking to capitalize off forthcoming weakness in equities. According to data compiled by Bloomberg, over 80 percent of S&P 500 companies who revised their profit estimates are expecting weaker-than-expected earnings.

“One of the things that investors seem to be overlooking is how poor the earnings environment is,” said David Spika, president of GuideStone Capital Management. “We’re so focused on monetary policy and this mythical China deal that we just don’t seem to be paying attention to earnings, which are really what should be driving stock prices.”

As investor fears of a global economic slowdown, trade wars, and now weaker-than-expected earnings permeate the capital markets, it’s stoking the fire for more gains for bears. As such, traders can look at plays like the  Direxion Daily S&P 500 Bear 3X ETF (NYSEArca: SPXS).

“There is some sagging in earnings,” said John Lekas, chief executive officer and senior portfolio manager at Leader Capital. “I’m not disputing that earnings across the board are priced to perfection. You know, you’re going to get some disappointments in there.”

U.S. equities reached record highs to kick off the trading week ahead of Independence Day, but the fireworks could be short-lived when second-quarter earnings reports begin to flood the markets in mid-July.

“The harsh reality is data is going to impact sentiment,” said Michael Yoshikami, founder of Destination Wealth Management. “I don’t think it’s something that can be ignored. Even though markets are at all-time highs, the economy is definitely slowing.”

Wall Street analysts are bracing for weaker-than-expected earnings results, particularly when 77% of the 113 companies that have issued earnings per share guidance are expecting earnings to shrink, according to FactSet data.

“If you’re worried about earnings, you should be taking some chips off the table,” Goldberg said. “We’ve had a real nice rally this year. I wouldn’t be surprised if we had a pullback.”