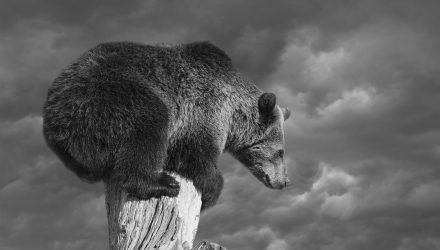 The S&P 500 is rallying to start 2019, but some traders are expressing a different with the ProShares Short S&P500 (NYSEArca: SH), one of the largest and most heavily traded inverse exchange traded funds in the U.S.

SH is not a leveraged fund. Rather, the ProShares product is designed to deliver the daily inverse performance of the S&P 500. For example, if the S&P 500 falls by 1% on a particular day, SH should rise by a similar amount. Data suggest traders are flocking to SH.

“The $2.3 billion ProShares Short S&P 500 ETF, ticker SH, took in nearly $380 million last week, the most since 2010,” reports Bloomberg. “Although Friday saw the S&P 500’s third-biggest rally since 2012, the inflows, which came toward the end of the week, show that not everyone sees blue skies for stocks.”

While SH is not a leveraged ETF, it is still not intended to be a long-term investment vehicle.

“Due to the compounding of daily returns, ProShares’ returns over periods other than one day will likely differ in amount and possibly direction from the target return for the same period,” according to ProShares. “These effects may be more pronounced in funds with larger or inverse multiples and in funds with volatile benchmarks. Investors should monitor their holdings as frequently as daily.”