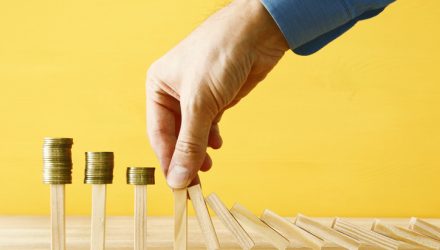 The S&P 500® is coming off one of the best years it’s seen in decades, the Dow Jones Industrial Average is knocking on the door of 30,000 after only 2 years in the 20,000 range and traders are unsure whether the party’s ever going to end.

While there’s no telling when the current rally might abate, a large contingent of cautious traders has started the New Year hedging some of the market’s euphoria by seeking exposure to fixed-income funds.

A Big Year for Growth (and Debt)

The fact that 2019 was a huge year for price gains in both equity and debt instruments puts bullish and bearish traders alike in an interesting position. While SPXL ended the year up more than 100%, Direxion’s two 3X fixed-income ETFs, the Direxion Daily 7-10 Year Treasury Bull 3X Shares (TYD) and TMF finished 2019 up 16.77% and 38%, respectively. What’s more, they often moved inverse to the SPXL, usually seeing some of their biggest moves as equities fell. 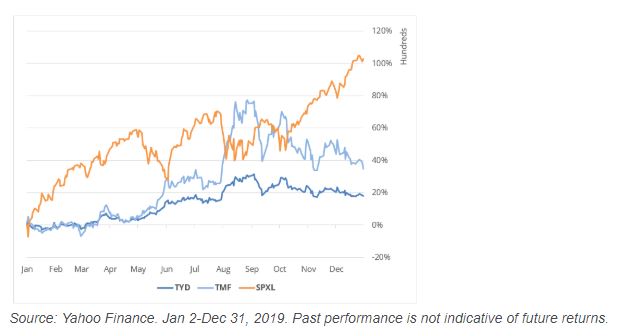 The price action in 2019 is in part thanks to three consecutive interest rate cuts from the Federal Reserve aimed at encouraging borrowing and staving off recessionary threats like slow global growth and the U.S- China trade war. While the cuts fueled borrowing among companies and enticed investors to maintain their exposures, they also pushed bond yields lower across the board and buoyed the price of existing bonds that come with a more attractive rate.

What’s more, the grim global outlook in 2019 also prompted international investors to seek out the steady yield from U.S. treasury notes that, although historically low, come with a better yield than other government debt instruments that carry negative rates.

Although Wall Street is currently enraptured in another staggering rally, the increasing interest in fixed-income does hint at the potential for turbulence as 2020 gets underway.

That’s because despite the improved performance of equity investments through the latter half of 2019 and the initial days of 2020, uncertainty still abounds about the resilience of the global economy. Most traders are already well aware of the high valuations and diminished outlook many companies have outlined for their upcoming fiscal year. Additionally, the latest and most optimistic projections from the International Monetary Fund anticipate similar growth trends and risks that characterized 2019, including trade hazards and diminished growth from developed nations.

Another emerging trend furthering the likelihood of increased volatility is currently playing out in the futures market, specifically VIX futures. While CBOE’s Volatility Index has plotted a steady course to year-lows, February VIX contracts surged into the new year and put the spread between January and February contracts at more than 4 points.

The options curve smooths over heading into March, which itself represents another drastic shift in spreads that could cause a reverberation effect in the stock market. In any case, the high price for near-term contracts puts the relative calm the market is seeing now into fairly stark relief. 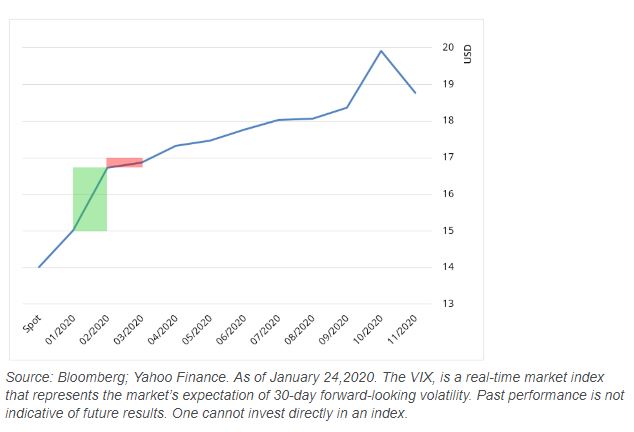 These fundamental headwinds are capped off by an already raucous election year in the United States and the ongoing impeachment trial of the sitting U.S. President. As that political chess match plays out, the market may begin to fray at the edges. Especially as some candidates from the Democratic side like Sens. Bernie Sanders and Elizabeth Warren gain traction and cause anxiety on Wall Street for their extreme regulatory and economic proposals and President Trump threatens to continue his policy of trade protectionism.

What do these obstacles mean for fixed-income? For the time being, U.S. bonds and treasury notes remain the safest and highest yielding investment for institutional and international investors to hold. While bond prices likely won’t see the same kind of shot in the arm they did last year with the three interest rate cuts, rates are also not likely to rise and push prices down.

That fact underlies the current market rally, which has seen the S&P 500® tack on 15% since the start of October despite few fundamental catalysts. The point is, there is a lot of optimism on Wall Street at the moment, but at the edges there remain a lot of warning signs as well. If and when volatility strikes, the first place investors have looked for safety recently has been with U.S. debt.

These leveraged ETFs seek investment results that are 300% of the return of its benchmark index for a single day. Investing in Leveraged ETFs may be more volatile than investing in broadly diversified funds. The use of leverage by an ETF increases the risk to the ETF. Leveraged ETFs are not suitable for all investors and should be utilized only by sophisticated investors who understand leverage risk, consequences of seeking daily leveraged, or daily inverse leveraged, investment results and intend to actively monitor and manage their investment. The ETFs seek to return a multiple of the benchmark indexes for a single day are not designed to track their respective underlying indices over a period of time longer than one day.

The “S&P 500® High Beta Index” is a product of S&P Dow Jones Indices LLC (“SPDJI”), and has been licensed for use by Rafferty. Standard & Poor’s® and S&P® are registered trademarks of Standard & Poor’s Financial Services LLC (“S&P”); Dow Jones® is a registered trademark of Dow Jones Trademark Holdings LLC (“Dow Jones”); and these trademarks have been licensed for use by SPDJI and sublicensed for certain purposes by Rafferty. Rafferty’s ETFs are not sponsored, endorsed, sold or promoted by SPDJI, Dow Jones, S&P, or their respective affiliates and none of such parties make any representation regarding the advisability of investing in such product(s) nor do they have any liability for any errors, omissions, or interruptions of the S&P 500® High Beta Index.

Direxion Shares Risks – An investment in the ETFs involves risk, including the possible loss of principal. The ETFs are non-diversified and include risks associated with concentration that results from an ETF’s investments in a particular industry or sector which can increase volatility. The use of derivatives such as futures contracts and swaps are subject to market risks that may cause their price to fluctuate over time. The ETFs do not attempt to, and should not be expected to, provide returns which are a multiple of the return of their respective index for periods other than a single day. For other risks including leverage, correlation, daily compounding, market volatility and risks specific to an industry or sector, please read the prospectus.