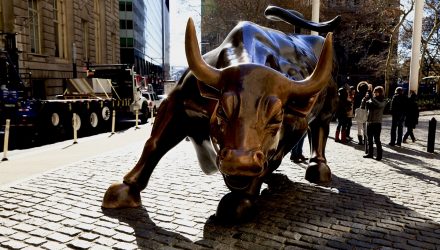 With expectations of easier monetary policy and further progress in trade negotiations the S&P 500 once again reached a new record Tuesday. While earnings week is a key dynamic in the current trading environment, the central bank is widely predicted to lower interest rates by 25 basis points this week. That would be the third time this year the Fed cuts rates, and it could be the last for a while.

President Donald Trump was elated on Monday, as the broad market index breached new high territory, tweeting that the move to record highs was a “big win for jobs, 401-K’s, and, frankly, EVERYONE.”

The S&P just hit an ALL TIME HIGH. This is a big win for jobs, 401-K’s, and, frankly, EVERYONE! Our Country is doing great. Even killed long sought ISIS murderer, Al-Baghdadi. We are stronger than ever before, with GREAT upward potential. Enjoy!

The S&P 500 broke above its last major high set over the summer, hitting a record high of nearly 3043 on Monday, as investors were encouraged by robust earnings and what appears to be progress on U.S.-China trade.

The S&P 500 rose 0.6% on Monday to trade above the 3,027.98 record set on July 26. Meanwhile the other indices followed suit with the Dow Jones Industrial Average gaining 0.4% and the Nasdaq Composite climbing 0.9%. While the other two indices have struggled on Tuesday, the S&P 500 reached a marginal new high of 3047.87 before curtailing some of the gains, and is currently trading nearly unchanged as of 230 pm EST.

“We broke out of this range we’d been in for several months between 2,800 and 3,000 on the S&P 500,” said Paul Brigandi, head of trading at Direxion. “The market now is in a good place. Rates are low. We have another FOMC meeting tomorrow and we’re probably going to get another rate cut.”

The S&P 500′s record high extended the second-largest ever bull market to 3,885 days, according to data from Bespoke Investment Group.

Investors are also sanguine that at least a partial trade deal between China and the U.S. will be signed next month.

“Although a lot of ill will has been bred and there is more work to do, [President Donald] Trump has referred to Phase 1 of this deal as a ‘love fest,’” said Bruce Bittles, chief investment strategist at Baird. “Should some form of agreement transpire, it would likely lessen business uncertainty, restore capital spending and be a positive for the stock market.”