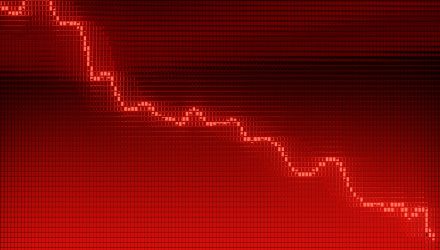 Markets Give Up All January Gains As Coronavirus Fears Intensify

After a strong rally Thursday following talk from the World Health Organization that the coronavirus is now a global health emergency, U.S. stocks were hit hard once again on Friday, wiping out the Dow Jones Industrial Average’s gain for January, as investor trepidation about the potential economic impact of China’s fast-spreading coronavirus once again resurfaced.

The Dow dropped 524 points, or 1.8%, after airlines stepped in to curtail flights to China. The S&P 500 was down more than 50 points, and nearly 100 from the overnight high, while the Nasdaq Composite, which is following the other indices, sank 1.35%.

Delta and American suspended all flights between China, while United Airlines announced similar measures later in the day.

But now “there’s fear going into the weekend,” Feygin added. “The theme coming into this year was the Fed and Trump are going to bail us out of any problems, but the virus is something neither one can do anything about. That’s a reason to become more fearful.”

“This is a very serious public health situation,” said Dr. Nancy Messonnier, director of the National Center for Immunization and Respiratory Diseases. “Moving forward, we can expect to see more cases, and more cases means more potential for person-to-person spread.”

Although there has been much speculation as to how the virus is spread, health officials said Thursday that they still are unsure whether the virus is infectious before symptoms. Officials are working with hospitals to ensure that health-care providers are “protected,” Messonnier said.

“Despite the case that we are reporting the first instance of person-to-person transmission in the United States, it is important to note that these two individuals were in close contact,” she added.

China’s National Health Commission confirmed on Friday that there have been 9,692 confirmed cases of the coronavirus, with 213 deaths.

“The outbreak of the coronavirus has added another headwind to the near-term outlook for stocks,” said Peter Berezin, chief global strategist at BCA Research, said in a note. “Viruses often become less lethal as they mutate because a virus that kills its host is also a virus that kills itself. Unfortunately, in a world of mass travel, a virus can spread across the globe before it has time to lose potency.”

Savvy investors looking to play the short side of the market could consider the Direxion Daily S&P 500 Bear 3X ETF (SPXS).

Markets are on their lows and tanking as of 1:30 pm EST.