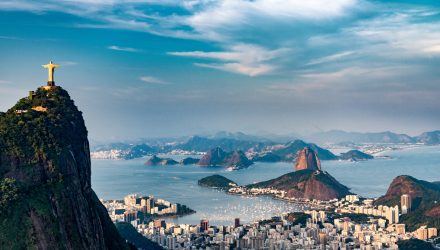 The U.S. capital markets gained Monday on news that the United States and Canada reached an agreement to revamp the North American Free Trade Agreement, which would be supplanted by the United States-Mexico-Canada Agreement. The Latin America-focused Direxion Daily Latin America Bull 3X ETF (NYSEArca: LBJ) is up 9.21% today and 32.5% the past month.

With an initial trade deadline set for August 31 that extended beyond that date, both the U.S. and Canada were able to reach an agreement to supplant the current NAFTA agreement with the USMCA agreement. In late August, the U.S. struck a deal with Mexico to effectively eliminate the NAFTA name and create the United States-Mexico Trade agreement–a deal that would have gone forward without Canada if no agreement could be reached.

The deal struck with all three nations would allow for more market access to U.S. dairy farmers with Canada capping automobile exports to the U.S. The U.S., Mexico and now Canada are expected to sign the agreement by the end of November, which would then go to Congress for approval–an approved agreement could eventually boost LBJ if a pending approval is not already priced into the ETF by that time.

The success of LBJ will also hinge upon Brazil’s looming presidential election as voters will head to the polls on Sunday to decide on the country’s next president, which will heavily impact the Brazilian markets and its economy on a going-forward basis. Brazil’s presidential election on October 7 is a tight one that features five candidates with no clear-cut favorite–Jair Bolsonaro of the Social Liberal Party, Ciro Gomes of the Democratic Labor Party, Geraldo Alckmin of the Brazilian Social Democratic Party and Fernando Haddad of the Workers’ Party.

With no clear-cut victory based on various data extrapolated from polls, the political polarization currently experienced in the country could mean that the victor will face obstacles winning over the general populace upon taking office, particularly when it comes to addressing the economy.