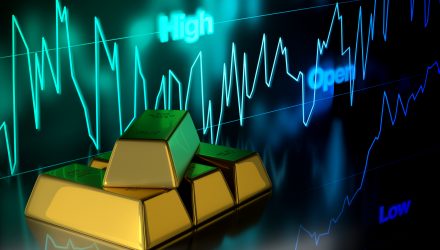 In less than 24 hours, China responded to the latest salvo of tariffs fired off by U.S. President Donald Trump as Beijing announced it will impose $60 billion worth of tariffs on U.S. goods beginning on Sept. 24. The new round of tariffs from China are said to affect a list of 5,207 products within a range of 5 to 10% as both the U.S. and China have already slapped each other with tariffs worth $50 billion total.

An hour before the close, JNUG posted a minor loss at 0.79% and NUGT was up 1.11%, while in yesterday’s trading session, both surged–JNUG up 7.37% and NUGT up 5.99%–as investors sought to gold for safe-haven assets with trade wars looming. Gold prices in general have been able to slough off any effects of the recent trade spats.

“Traders now have bigger concerns that the U.S. could turn even more punitive if Beijing fights back…,” said Marios Hadjikyriacos, analyst with brokerage XM. “Gold [prices]continue to exhibit almost no interest in any developments on the trade front, remaining in a narrow range between $1,189 and $1,214” in recent action.”