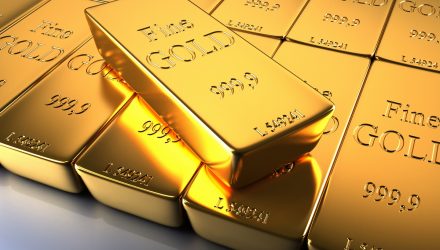 After four rate hikes in 2018, the Federal Reserve pausing interest rates in 2019 could also result in a weaker dollar and stronger demand for gold. On Tuesday,

“Overall, while the increasing ‘short-termism’ amongst investors has ensured it’s been rather easy to look through the public debt issue largely in the U.S., history reminds us that the confluence of risky and unpredictable policies, excessive borrowing and higher interest rates pose a toxic threat. Gold is a real asset and currency hedge against unchecked and massive US and global debt growth,” said analysts at Scotiabank.

“Overall, gold can mildly rally in a quantitative tightening cycle if the Feds outlook creates enough uncertainty to global risk assets and/or if the Fed remains behind the inflation curve ensuring real rates remain close to zero,” the analysts added. “Gold will suffer if there is certainty around QT and confidence for a soft-landing increases.”

Last week, palladium soared past $1,400 an ounce. Last month, the price of palladium bested gold for the first time in 16 years.