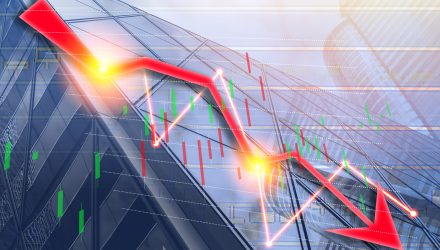 Last week’s sell-off in U.S. equities is spilling over into the emerging markets space, leaving investors to wonder when the strategy for value-hunting in EM turns into outright avoidance. One ETF that has been benefitting from EM’s unceremonious fall from its rise in 2017 is the Direxion Daily MSCI Emerging Markets Bear 3X ETF (NYSEArca: EDZ).

EDZ seeks daily investment results that equal 300% of the inverse of the daily performance of the MSCI Emerging Markets IndexSM. EDZ invests in swap agreements, futures contracts, short positions or other financial instruments that, in combination, provide inverse or short leveraged exposure to the index equal to at least 80% of the fund’s net assets. The index is a free float-adjusted market capitalization weighted index that is designed to represent the performance of large- and mid-capitalizations securities across the 24 emerging market countries.

EDZ was up 3.13% today and 12.3% in just the past month as the emerging markets sell-off mimicked that of U.S. equities last week. Per an article in the Wall Street Journal, a number of investors “expect further pain for developing economies, pointing to the jump in Treasury yields, a strengthening dollar and trade tensions.”

Instead, investors can look to emerging markets opportunities that are country-specific to dampen external effects by starting with those that boast the largest gross domestic products, such as India and Brazil as well as ETFs that focus on EM debt.

The International Monetary Fund’s director of fiscal affairs Vitor Gasper said that global debt reached a new high in 2017, topping the $182 trillion mark, but also said that India’s debt, in particular, is much less than global debt as a percentage of the world’s gross domestic product (GDP).

With the rupee experiencing its doldrums this year, India could present investors with discounted opportunities that could benefit INDL if the country’s central bank is able to shore up its local currency. Just today, the Reserve Bank of India announced it would inject 120 billion rupees or US $2.1 billion into its financial system through the purchase of government bonds.

Per Investopedia, “India is the fastest growing trillion-dollar economy in the world and the sixth largest with a nominal GDP of $2.61 trillion. India is poised to become the fifth largest economy overtaking the United Kingdom by 2019 as per the IMF projection.”