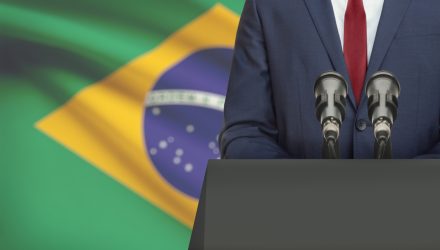 Brazilian assets have recently been rallying in anticipation of the first round election. For example, the Direxion Daily MSCI Brazil Bull 3X ETF (NYSEArca: BRZU) entered Friday as the best-performing leveraged bullish exchange traded fund in Direxion’s stable on a month-to-date basis. BRZU looks to deliver triple the daily returns of the MSCI Brazil 25/50 Index.

Bolsonaro “is running on a platform of liberalising gun laws, while cracking down on crime and corruption,” reports RTE. “A member of the relatively small, conservative Social Liberal Party, he also has the backing of millions of evangelical Christians who praise his anti-abortion stance.”

The economy will certainly be on the minds of voters as the Brazilian economy has been slogging its way to a recovery after it experienced its worst recession to date as unemployment levels remain high with double-digit figures and the country is drowning in public debt–equal to 74% of GDP.