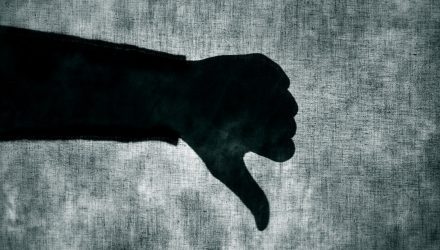 A Leveraged Bear ETF to Take Advantage of Investor Pessimism

S&P 500 bear traders are feeling optimistic about the pessimism retail investors are exhibiting, which makes a prime play for the Direxion Daily S&P 500 Bear 3X ETF (NYSEArca: SPXS). According to a survey by the American Association of Individual Investors, close to half feel the S&P 500 will be in negative territory in six months.

The 48.9 percent who see the S&P 500 in the red in six months’ time registers the highest reading since April 2013. Furthermore, it represents an 18.4 percent jump from last week’s reading as the capital markets were dominated by trade war worries.

Trade war fears have been seeping back into the markets as investor optimism surrounding the tariff war ceasefire between U.S. President Donald Trump and Chinese president Xi Jinping last week faded, causing the S&P 500 to dip below its 200-day moving average while the “death cross,” a technical chart pattern term that could signal a major sell-off, looms.

Following October’s bout with volatility that spilled over into November following the mid-term elections, the “death cross” is certainly not a welcome sign for investors. Hence, the increased pessimism–a welcome sign for S&P 500 bears and SPXS.