You are at:Home»Featured»Inverse Oil ETFs To Watch As Crude Oil Gets Crushed To The Tune Of 5.5% On Mexico Tariff Fears 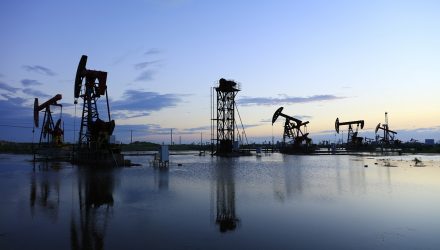 Inverse Oil ETFs To Watch As Crude Oil Gets Crushed To The Tune Of 5.5% On Mexico Tariff Fears

Front-month contract prices were down nearly 6% for the week and some 13% for May, according to Dow Jones Market Data. At current levels, prices were headed for their worst monthly decline since November, when it skidded 22%, and its worst May drop since 2012, when the most-active contract fell more than 17%.

“Adding on to an already bearish trend, President (Donald) Trump announced plans for a 5% tariff on Mexican imports, with framework for continued escalation related to border security,” said Robbie Fraser, senior commodity analyst at Schneider Electric. “The move will add to existing trade and economic concerns, but also carries specific risks for crude and products, with Mexico being a key energy trade partner.”

The U.S. may allow some countries to persist in importing Iranian oil, despite the cessation of sanctions waivers in early May, according to a report from The Wall Street Journal, contributing to further downward pressure on crude prices. The report said countries that haven’t yet reached a U.S. cap on imports of Iranian oil can proceed to trade until they hit the previously negotiated barrier.

“Traders have been told that the goal was to get Iranian oil exports to zero,” said Phil Flynn, senior market analyst at Price Futures Group. “The last time President Trump granted waivers to Iranian oil buyers it caused one of the biggest selloffs in oil history, and traders and producers still have that etched in their minds.”

Finally, the general environment of global uncertainty that persists due to the trade spat, Brexit, and other concerns is weighing heavily on crude prices.

“Trade tensions and worries about a possible slowdown if not a recession, had a detrimental effect on oil prices, as demand for black gold could drop,” said Peter Losif, senior research analyst at IronFX.

Investors looking to place short bets on oil through ETFs as prices head lower could look into  the VelocityShares 3x Inverse Crude Oil ETN (DWT) or ProShares UltraShort Bloomberg Crude Oil (SCO), which are up 12% and 8% respectively Friday.