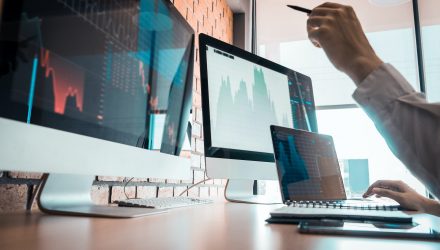 Stocks continued to struggle on Friday, making inverse ETFs a solid play recently, as investors digested a challenging week of trading that included a spike in coronavirus cases globally, a breakdown in fiscal stimulus talks, and a contentious upcoming presidential election.

With new coronavirus cases reaching an all-time high this week in the U.S., according to data from Johns Hopkins University, stock tumbled from their mid-month bounce, to mark a nearly 10% correction from the recent all-time highs in the S&P 500. Meanwhile, Germany and France announced new lockdown measures to stem the dissemination of Covid-19.

“Massive policy stimulus, positive medical developments and high hopes for a return to pre-pandemic economic activity levels have provided a solid boost to equity markets,” strategists at MRB Partners wrote in a note. “However, mounting new economic restrictions, particularly in Europe, despite being forecastable and in lagged response to the re-acceleration in COVID-19 infections, only caught investors’ attention this week, triggering sharp losses.”

The ProShares Short S&P 500 (SH) gained almost 1% Friday, and even more throughout the week, while the other major indexes plummeted. Another highly leveraged ETF for savvy investors, the Direxion Daily S&P 500 Bear 3X Shares (SPXS) rallied 3.40% Friday, catalyzed by its triple leverage.

Traders and investors had been confident that a stimulus deal would come to fruition prior to the election, as some recent data reveals that the economic recovery could suffer without more support. A lack of a deal has helped to drive markets lower, bolstering inverse ETFs as a consequence.

Meanwhile, more volatility is likely in store for investors, and with data compiled by RealClearPolitics revealing that former Vice President Joe Biden is maintaining an average lead more than 7 percentage points over President Donald Trump, some financial pundits are noticing concern amongst market participants.

Gina Bolvin Bernarduci, President of Bolvin Wealth Management, noted that several of her clients were worried about the election outcome and how it could affect their investments.

“We have had more calls about the election recently than we had during the big sell-off in March,” said Bernarduci. “I think it’s going to be a few volatile days, but there are factors that affect the market more than who wins the election.”

“Investors should also keep in mind what happened four years ago. Everybody thought that if Trump won, that would have been bad for the market, yet we made [more than 100 new highs]in four years,” Bernarduci said.

With the Dow, S&P 500 and Nasdaq all posting their first back-to-back monthly losses since March, inverse ETFs have been a good bet lately. After a strong start to the month, the Dow plummeted over 6% this month, while the S&P 500 and Nasdaq each tumbled over 5% in October. Tech stocks were partially to blame, as Apple stock dropped 5.6% after the tech giant reported a 20% fall in iPhone sales, while Amazon sank 5.5% even after the tech giant reported blowout third-quarter results.
That means for savvy and nimble investors and traders looking for more downside to come, an ETF like the ProShares UltraShort QQQ (QID), which added nearly 5% Friday, could be something worth exploring for the future.
For more news and information, visit the Leveraged & Inverse Channel.