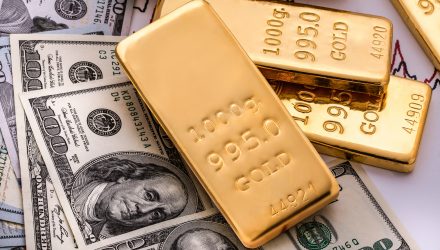 The dollar got some news it didn’t want to hear on Thursday when the U.S. Commerce Department reported that the consumer price index (CPI) rose during the month of August albeit at a slower pace than the previous month, reflecting the first slowdown in the past year. Nonetheless, the U.S. dollar weakened to a two-week low against its fiat currency peers, which could present an opportunity for investors eyeing gold as a chance to trade further weakness in the greenback.

Rather than investing in gold directly or trading its spot prices, investors can use leveraged ETFs to amplify their gold plays, such as the Direxion Daily Jr Gld Mnrs Bull 3X ETF (NYSEArca: JNUG). The Commerce Department reported that the Consumer Price Index (CPI) rose 0.2% during the month of August, but fell short of the expectations set forth by polled economists who forecasted a gain of 0.3%.

The prevailing sentiment in the capital markets thus far is that the Federal Reserve is expected to raise the federal funds rate two more times before the end of 2018–whether or not the latest inflation numbers are enough to give pause to that notion remains to be seen. In the meantime, investors banking on further rises in gold can look to JNUG, but there’s also an option for bears in Direxion Daily Jr Gld Mnrs Bear 3X ETF (NYSEArca: JDST).

“In many ways, the current inflation environment is just what the Fed wants to see,” the Wells Fargo Research Team noted. “Core inflation has slowly moved back up to levels consistent with the FOMC’s target. Yet there are few signs of inflation blowing far past the Fed’s comfort zone and forcing the Fed to raise rates faster than expected; inflation expectations—especially longer-term views—have been little changed.”

The natural rate of interest, which reflects the rate of growth in gross domestic product relative to its trend rate and is used as a basis for comparison with market rates, is expected to rise, putting downward pressure on gold prices–a trend that could continue through the rest of 2018. This could make the case for traders using JDST to capitalize on any further weakness in gold.