You are at:Home»Leveraged & Inverse Channel»INDL ETF Could See Boost Thanks to India Investment Growth 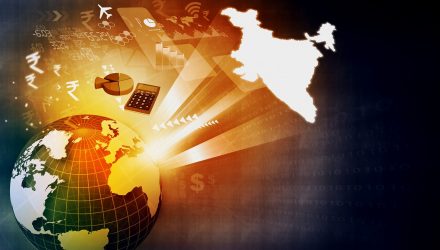 INDL ETF Could See Boost Thanks to India Investment Growth

India’s Central Statistics Office recently lowered its gross domestic product (GDP) estimate to 7 percent from 7.2 for 2019, which represents the lowest GDP growth within the last five years. A lack of growth in agriculture and government consumption have been dragging on the GDP estimate, but according to Money Control contributor Rajani Sinha, one positive sign is more investment growth.

“Investment GDP is estimated to have improved to 10 percent in FY19 from 9.3 percent in previous fiscal (CSO advance estimate),” Sinha noted in an article. “Other investment indicators like the index of industrial production (IIP) capitals goods growth has also improved to 7.3 percent in the fiscal year so far, against 4.2 percent in FY18.”

INDL’s recent upticks have it moving towards its 200-day moving average:

More foreign investment to stimulate the economy is the path that China has been taking as of late, which could also prove beneficial to India if it decides to mimic its strategy. China is becoming less resistant to safeguarding its businesses in order to open up pathways to more foreign investment.

Forbes reported this week that Chinese officials are meeting to discuss which sectors to give access to foreign investors–something India might also want to consider as an avenue for more growth.