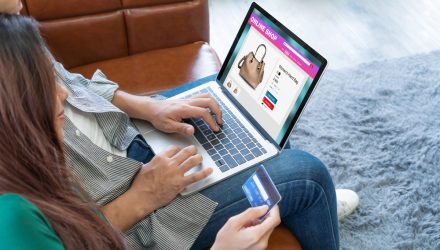 With their stomachs full on Thanksgiving Day, were consumers ready to empty their wallets during Black Friday and Cyber Monday? It’s a play that traders might be contemplating with the help of the triple-leveraged Direxion Daily Retail Bull 3X ETF (NYSEArca: RETL).

RETL seeks daily investment results of 300% of the daily performance of the S&P Retail Select Industry Index. RETL invests in securities found within the index, which is a modified equal-weighted index that measures the performance of the stocks comprising the S&P Total Market Index.

With its triple leverage, RETL gives investors the ability to:

RETL is up 37% year-to-date according to Morningstar, and more gains could be on the way if post-Thanksgiving sales come out better than expected. The fund shot up higher right at the start of November, surpassing its 50-day moving average.

The relative strength index (RSI) shows RETL in overbought territory, so traders may want to keep the fund on their watch lists for an entry point below that 70% level. Of course, actual sales figures will be the primary fundamental driver for RETL. What are the early indications on sales thus far?

As far as early indications go, it’s best to get the sentiment from the National Retail Federation. Thus far, the trade organization is projecting lukewarm sales figures.

“Fewer holiday shoppers bought gifts during the five-day period from Black Friday to Cyber Monday, and those who did spent less, as discounts started early this year, according to the National Retail Federation,” a CNBC report noted. “The retail trade group said about 186.4 million shoppers bought holiday gifts, food or decorations from Thanksgiving to Cyber Monday. That’s less than the 189.6 million shoppers who bought items during that period last year, but higher than the 165.8 million who shopped in 2018.”

“As the coronavirus cases have spiked across the country over the past few weeks, we continue to see consumers prioritize their personal health and safety as well as public health and the health of the communities in which they live and work,” said NRF Chief Executive and President Matt Shay. “They continue to adjust their shopping behavior online to avoid large crowds.”