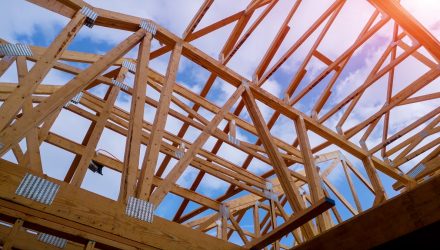 KB Home (KBH)  was upgraded to ‘outperform’ from ‘sector perform’ at RBC Capital Markets and the firm increased its price target on the homebuilder by $5 to $30. As a result, KB Home shares rose 2.5% to $27.47 in trading Thursday. KBH is just one of the stocks that may signal a trend in improving homebuilder stocks.

Housing starts in April in the U.S. rose 5.7%, more than expected, to a seasonally adjusted annual rate of 1.235 million units last month, the Commerce Department said. Data for March was acclimatized to show homebuilding rising to a pace of 1.168 million units, instead of falling to a rate of 1.139 million units as previously reported.

Despite many of the concerns that are surrounding the current trade war and economic environment, there is cause for optimism after the National Association of Home Builders/Wells Fargo Housing Market Index rose a point during the month of April.

The index, a measure of homebuilder confidence, gained last month as industry experts cited strong demand in the spring. Compared to a year ago, however, the index is still down five points.

Homebuilder stocks have been rising, with the SPDR S&P Homebuilders ETF (XHB) up 22% year to date. KB Home has gained 38% so far in 2019.

In a move that was widely anticipated by most market experts, last month the Federal Reserve elected to keep rates unchanged, holding its policy rate in a range between 2.25 percent and 2.5 percent. In addition, the central bank alluded to no more rate hikes for the rest of 2019 after initially forecasting two, both of which are favorable for homebuilders.