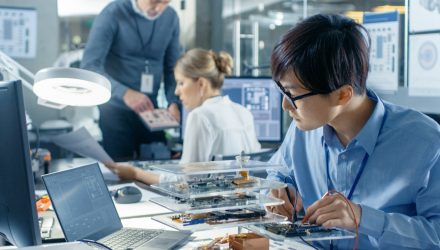 Interest rates, trade wars and a global economic slowdown may be adding to the wall of worry for traders, but it doesn’t mean there aren’t opportunities to be had. Two areas, in particular, are in China and robotics.

Additionally, China is becoming less resistant to safeguarding its businesses, which will open the pathways to more foreign investment. Forbes reported this week that Chinese officials are meeting to discuss which sectors to give access to foreign investors.

China ETFs have also been the beneficiaries of index provider MSCI Inc. announcing recently that it would quadruple its weighting of large-cap Chinese shares in its benchmark indexes. In a press release, MSCI Inc. said it would increase the weight of China A shares in the MSCI Indexes by increasing the inclusion factor from 5% to 20% in three steps.

The decision came after an extensive global consultation with a large number of international institutional investors, including asset owners, asset managers, broker/dealers and other market participants worldwide. MSCI said the proposal to increase the weight of China A shares garnered overwhelming support from investors.

“China pops up pretty materially–both the bull product and the bear product,” David Mazza, Head of Product at Direxion Investments told ETF Trends. “Depending on what’s happening in performance, you see one over another gaining the most interest and from a volume perspective, we’ve seen both increase materially.”

Rise of the Robots

Robotics, artificial intelligence (AI), machine learning, or any other type of disruptive technology is slated to the next wave of innovation. For investors who missed out on the serendipitous run of FAANG (Facebook, Amazon, Apple, Netflix, Google) stocks, they can look to capitalize on disruptive tech options in 2019.

Traders can take advantage of the rise in robotics through the Daily Robotics, Artificial Intelligence & Automation Index Bull 3X Shares (NYSEArca: UBOT). UBOT seeks daily investment results equal to 300 percent of the daily performance of the Indxx Global Robotics and Artificial Intelligence Thematic Index, which is designed to provide exposure to exchange-listed companies in developed markets that are expected to benefit from the adoption and utilization of robotics and/or artificial intelligence.

UBOT is up 52.66 percent according to Morningstar performance figures.

“That (UBOT) has seen a real nice uptick in volume as of late,” said Mazza. “Part of that comes from the performance side.”