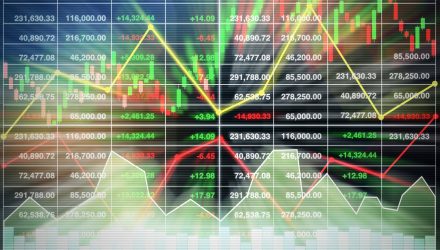 The Financial Select Sector SPDR Fund (NYSEArca: XLF) was little changed, falling 0.52 percent while for traders, the Direxion Daily Financial Bull 3X ETF (NYSEArca: FAS) was down 1.47 percent on the added leverage as of 11:15 a.m. ET.

Goldman Sachs reported that revenue fell 13 percent to $8.81 billion, which came below analyst’s $8.9 billion estimate. Furthermore, the firm generated $2.25 billion of profit in the period or $5.71 a share, which exceeded the $4.89 estimate.

“We are pleased with our performance in the first quarter, especially in the context of a muted start to the year,” Goldman CEO David Solomon said in the release. “Our core businesses generated solid results driven by our strong franchise positions. We are focused on new opportunities to grow and diversify our business mix and serve a broader range of clients globally.”

“Our earnings reflect the progress we are making to improve our return on and return of capital. Both our consumer and institutional businesses performed well and we saw good momentum in those areas where we have been investing,” CEO Michael Corbat said in a statement.

Related: Valuation On The Dark Side And First Steps On Pricing

CEOs of big banks faced the music of Capitol Hill last week with a grilling from the House Financial Services committee.. All the government finger-wagging came as a precursor to banks’ first-quarter earnings, which kicked off last Friday.

On the Capitol Hill hot seat was:

The CEOs faced a battery of questions regarding executive compensation, income inequality and the overall stability of the nation’s banking system. It all ties back to the financial crisis over a decade ago–a simple matter of “checking in.”

XLF recently crossed its 200-day moving average last week with the strength in earnings from J.P. Morgan despite Wall Street analysts are already expecting a less-than-stellar earnings season for the first quarter.  Investors are looking at a 4.3 percent year-over-year reduction in earnings growth, according to FactSet estimates.