You are at:Home»Leveraged & Inverse Channel»Euro ETFs Are Vulnerable to Further Weakness 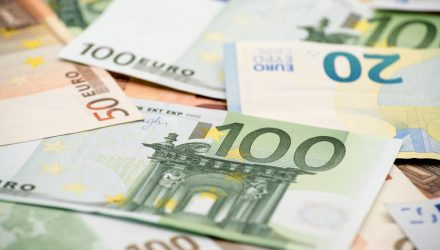 The euro and currency-related ETFs have slipped to multi-year lows and face many headwinds that threaten to push this market lower.

The Invesco CurrencyShares Euro Currency Trust (NYSEArca: FXE) declined 4.9% year-to-date to its lowest level since early 2017, with the euro now trading at $1.0967.

Weighing on the euro currency, the Eurozone’s deeply negative rates, expectations of further easing out of the European Central Bank, ongoing global trade war and relatively high-yield U.S. assets have all taken their toll, the Wall Street Journal reports.

Salman Ahmed, chief investment strategist at Lombard Odier IM, warned of the possibility of the exchange rate reaching $1 to the euro, or parity, especially if Eurozone governments fail to raise spending to counteract the slowdown since the ECB has less room to ease.

“If fiscal policy doesn’t come to the fore [in Europe]then parity is a credible forecast: A recession would put much more pressure on monetary policy to be more aggressive,” Ahmed told the WSJ.

While a weak euro could help the Eurozone’s export industry stay competitive on the global arena, the emergence of new trade barriers and anti-trade sentiment continue to weigh on these segments.

“If you’re an exporting nation and your currency drops that is helpful but exports are also linked to the global trade backdrop,” Caroline Simmons, deputy head of UBS Wealth Management’s U.K. investment office, told the WSJ.

Trump on U.S. dollar against a weak euro

Furthermore, President Donald Trump who has already shown displeasure at the relative strength of the U.S. dollar against a weak euro could enact aggressive measures to limit Eurozone trade if the Federal Reserve doesn’t step up to depreciate the greenback.

“Further weakness in the euro, for whatever reason, may annoy and aggravate the POTUS who already thinks the Europeans are nearly as bad as the Chinese with their FX policies,” Neil Dwane, global strategist at Allianz Global Investors, told the WSJ.