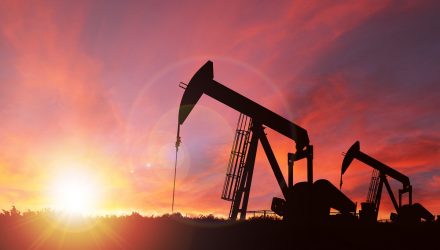 After some early morning gains, the Energy Select Sector SPDR Fund (XLE) is now pulling back, with concerns over the oil demand outlook offsetting yesterday’s surprise drop in crude oil inventories. The broader S&P Energy Sector is also falling, down 11% from a year ago.

Just a day after the American Petroleum Institute disclosed yet another estimated weekly increase in U.S. oil inventories, the Energy Information Administration rejected it, reporting a drawdown of 1.7 million barrels for the week to October 18.

Energy forecasters anticipate a deteriorating supply in 2020, placing OPEC+ in a bind. But beyond that, the slackening could result in a boom as supply growth slows down.

“For three years, oversupply has deteriorated Energy equity sentiment,” Goldman Sachs wrote in a note on Monday. That presented an impossible choice for OPEC – cut output or let prices crash? The group chose to slash production in an effort to rescue prices, but in doing so, it arguably prolonged the adjustment by propping up unprofitable shale drillers.

OPEC encounters a similar situation as it readies for its December meeting, and the prospect of another year of oversupply continues.

However, U.S. shale gas is actually slowing down according to analysts.

“We are seeing declining activity in U.S. shale oil production. Though there have been gains, these are lower than in previous years … This is a trend,” Russia’s Energy Minister Alexander Novak said, adding that at current oil prices, U.S. shale production will not grow as fast as it did in previous years.

“It is likely that in the near future, if the forecasts come to fruition, we will see a plateau in (U.S. oil) production within the next few years,” Novak said.

Theoretically, though, as shale gas drillers fall off in increasing numbers and rigs continue to get scrapped, the decline will aid the market in rebalancing, which could lead to a more sustainable price rally, according to Goldman.

“We believe this inflection may be around a year away,” Goldman Sachs wrote.