You are at:Home»Leveraged & Inverse Channel»Doubling Down on China with ‘CWEB’ ETF 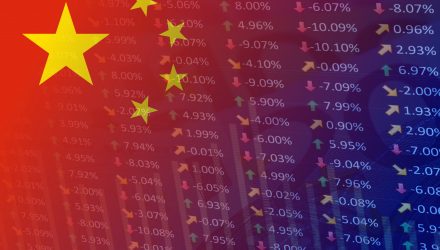 Doubling Down on China with ‘CWEB’ ETF

“Everything’s been pro-U.S.–people moving away from investing overseas, especially emerging markets–areas like China,” said ETF Trends publisher Tom Lydon on an interview with Fox Business. “However, Trump’s done a good job as far as trade talks in Europe, in Mexico, in Canada they’re making some progress there, but the holy grail is China.”

If investors begin to hone in on value, China-focused ETFs could get a reprieve from their year-to-date doldrums like the iShares China Large-Cap ETF (NYSEArca: FXI)–down 4.25% year-to-date, iShares MSCI China ETF (NasdaqGM: MCHI)–down 8.29% YTD and KraneShares CSI China Internet ETF (NYSEArca: KWEB)–down 13.51% YTD. CWEB itself is down 15.92% YTD as a result of its double leverage, but that could change moving forward.

While the two economic superpowers have locked horns on trade, the renewed talks could give a much-needed boost to China-focused ETFs and even emerging market ETFs. With respect to value compared to price, many of these ETFs from abroad present a profitable opportunity that can be realized, especially if China and the U.S. ameliorate their trade differences.

“When you look at areas like China and the emerging markets, that’s been the weakest area around the world this year,” said Lydon. “However, the values are there–you look at P/E ratios around 11 versus 18 here in the U.S.”

“There’s a lot of smart money coming in where people are saying ‘You know what? I think there’s enough momentum where we’re actually going to see some progress,'” added Lydon. “And if we do, these undervalued stocks are going to take off.”