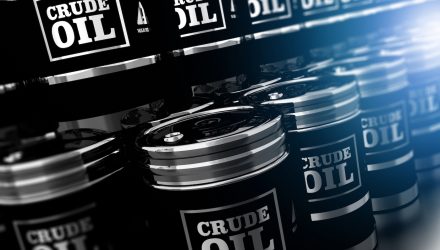 Crude oil made a run higher into the holiday weekend, gaining nearly 4% on Thursday, before pulling back from an earlier spike as investors await more news on negotiations between major producers who are finalizing an agreement to slash record amounts of oil in response to the global fuel demand collapse that has resulted from the coronavirus pandemic.

A nearly global economic lockdown to stem the dissemination of the coronavirus pandemic has damaged fuel demand, taming purchasing by almost 30%, and smashing oil prices to historic lows that took major petroleum bellwethers down by more than two-thirds before recovering in recent days in anticipation of action from oil producers.

Prices surged over 10% as the Organization of the Petroleum Exporting Countries (OPEC) and allies including Russia, part of OPEC+, seemed to agree to slash production by anywhere from 10 million to 20 million barrels per day (BPD), or about 10% to 20% of global supplies, OPEC and Russian sources said. Details remained murky, however.

Crude oil ETFs benefitted from the run-up as well, with the surge in crude oil futures sending crude ETFs such as the United States Oil Fund LP (USO) climbing up more than 6% before turning negative on the day, down 2%, while leveraged fund, ProShares Ultra Bloomberg Crude Oil (UCO) shot up as well before falling back 4% on the day.

On Monday the U.S. Department of Energy said that Secretary Brouillette took part in a “productive discussion” with Saudi Arabia’s energy minister concerning the “ongoing challenges and instability in global oil markets.” According to the statement, the two energy ministers decided to “continue this dialogue through a G20 Energy Ministers meeting in the near future.”
But some analysts are now skeptical of whether or not the deal will come together and are projecting more downside for crude oil, as the market has been shaky and consolidating near its lows recently.
“It’s probably going to crater,” Again Capital’s John Kilduff said of oil. “There was a lot of optimism priced into oil Thursday and Friday. With this new Saudi, Russia spat, it doesn’t look like it’s going to come together.”
For more market trends, visit  ETF Trends.