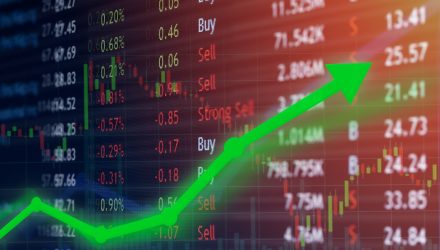 Stocks have been on a tear over the last several days, with U.S. equities and stock index ETFs exploding higher on Monday, catapulted by robust gains in the tech sector, and a surge in global equities, including Chinese stocks, despite an incessant growth in coronavirus cases. And although many analysts and investors have feared a retest of the March lows and more, one financial pundit is predicting a run to 4000 on the S&P 500 within the next 12 months.

The Dow Jones Industrial Average popped as much as 395 points Monday, or 1.5%, while the S&P 500 added 1.6%, and the Nasdaq Composite, which has been leading the other indexes surged 2.5% to an all-time high.

But Jeff Saut of Capital Wealth Management sees the run going much further than it has so far. Although the S&P has yet to retest the early June highs above 3200, Saut sees roughly 800 points above that level in the future for the famed index, citing a strong economy and better than expected earnings.

“Restaurants in New York are full; restaurants in St. Petersburg are full. The economy is doing a lot better than most economists think. So I think the economics are going to come on strong. I think earnings are going to do better than most people think. People are woefully underinvested. There are five trillion dollars in money market funds, so I think the markets are going up. I think they’re going up a lot more than people think. I think we may stall here for a while into the fall, into September October November. But I think you’re gonna get a rocket ship coming in the fall this year. And I actually think the S&P is going to trade above 4000,” said Saut on CNBC.
Although many experts are still wary that the bull market may have run its course, Saut feels this is something else, a secular bull market, which could have legs greater than many could possibly imagine.
“The economy is strong. It’s getting stronger. It will drive earnings higher than most analysts expect. And I’ll say it again: people are woefully underinvested. This is a secular bull market and not many of us have been around 50 years to see what a secular bull market looks like. And secular markets tend to last 15 to 20 years. So depending on your starting point, whether it’s October of ’08 or March 2009, this thing could have another 5, 6, 7 years left in it. And nobody believes it,” Saut added.
For investors who are willing to take on more risk to participate in potentially greater upside gains, the Direxion Daily S&P 500 Bull 3X Shares (SPXL) is something to consider.
For more market trends, visit  ETF Trends.