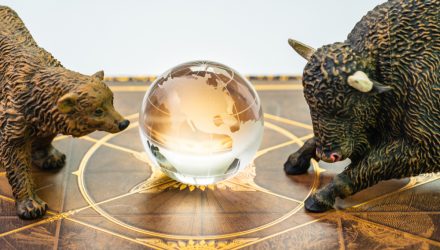 After a surge in COVID-19 cases that forced the government to institute lockdown measures, China is starting to reverse its course. This could be a boon or a bane — either way, Direxion Investments has leveraged products that can cater to bulls or bears.

As a Bloomberg report stated, a “border between Hong Kong and mainland China is set to ‘fully reopen’ early next month for the first time in three years, the South China Morning Post reported, as the Communist Party rolls back Covid restrictions to bolster its faltering economy.”

“Preparations are being made for the reopening of the border, including sending thousands of customs, immigration and police officers to land checkpoints to handle the expected crowds, the SCMP reported, citing unnamed people,” the report added.

If China is able to pull out of its economic doldrums with a re-opening of its economy, then traders can play the bullish card with the Direxion Daily FTSE China Bull 3X ETF (YINN). YINN tracks the FTSE China 50 Index, which consists of the 50 largest and most liquid public Chinese companies currently trading on the Hong Kong Stock Exchange.

The Bearish Case for China

On the other hand, a re-opening of the economy could work against China’s favor. COVID-19 cases could quickly rise again given how rapidly the virus can spread via its airborne nature, especially within close quarters.

In effect, this could cause China’s government to re-institute lockdown measures. That’s the last thing the country needs after the economy took a blow last year due to the real estate development crisis that it’s still trying to alleviate.

“The one area where there might be upside risk would be China’s reopening. And of course, there’s both downside and upside risks for the China case because as they reopen, we know cases are going to have to spread pretty quickly,” said Albert Park, chief economist at the Asian Development Bank, via a CNBC report.

Park noted that the re-opening could spark “waves in different parts of the country at different times,” and that “there’ll be a strong temptation by the government to reimpose controls or step back. That could be very disruptive for economic activity.”

Therefore, traders may want to take the other side with the Daily FTSE China Bear 3X Shares (YANG). The opposite of YINN, YANG seeks daily investment results equal to 300% of the inverse (or opposite) of the daily performance of the FTSE China 50 Index.