You are at:Home»Leveraged & Inverse Channel»Brazil ETFs Retreat as Economy Heads Toward a Recession 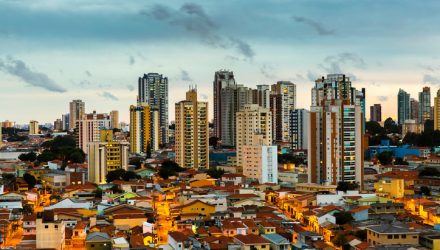 Brazil ETFs Retreat as Economy Heads Toward a Recession

Brazil country-specific ETFs are among the worst hit Monday as economic indicators suggest the Latin American market may be slipping into a recession.

The economy shrank by 0.2% in the first quarter and is only projected to grow by 0.8% this year, according to central bank, government, International Monetary Fund and consensus market forecasts.

“For now we keep our full 2019 estimate at 0.5%, with a slight upward bias,” Mauricio Oreng, senior strategist at Rabobank in Sao Paulo, told Reuters. “We are looking for a slight pickup in the second half of the year … but what we can say for sure is that the economy remains anemic and sluggish.”

Related: Leveraged Brazil ETF in Play After Economic Activity Picked up in May

With a weakening economic outlook, Brazil’s central bank has taken steps to loosen its monetary policy, even surprising markets with a larger-than-expected rate cut at its latest policy meeting. However, the looser monetary policy means a weaker real currency.

“The risk to this outlook is a continued currency depreciation,” Bank of America Merrill Lynch chief economist David Beker, told Bloomberg, adding that he expected an additional 125 basis points in cuts are in store this year provided its currency doesn’t steady at a weaker level. “The question is how far the exchange rate goes beyond 4 reais per dollar.”

Investors can also hedge against a further pullback in Brazilian equities through something like the ProShares UltraShort MSCI Brazil Capped ETF (NYSEArca: BZQ), which attempts to deliver two times inverse of the daily performance of the MSCI Brazil 25/50 Index,