You are at:Home»Leveraged & Inverse Channel»Leveraged Brazil ETF in Play After Economic Activity Picked up in May 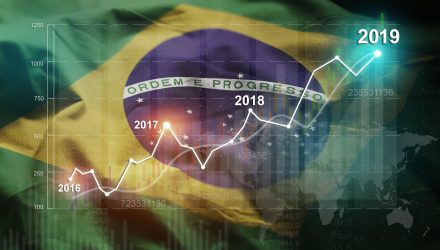 Aside from a summer day in the desert, you would be hard-pressed to find something hotter than the Direxion Daily MSCI Brazil Bull 3X ETF (NYSEArca: BRZU), which has been scorching with gains the past month. The fund is up over 18 percent month-to-date (as of July 12) and things could continue heating up based on an economic indicator tracked by the country’s central bank.

The central bank’s IBC-BR economic activity index, which is a leading indicator of gross domestic product (GDP), was 0.54 percent higher during the month of May. The index rebounded from a 0.47 percent decline compared to the previous month and also represents its strongest reading since June 2018.

However, it might be too early for Brazilian bulls to celebrate. Per an article in Reuters, Alberto Ramos, head of Latin American research at Goldman Sachs in New York, notes that “the monthly IBC-Br series, real GDP is still 7.9% below the December 2013 peak and just 3.6% above the December 2016 cyclical trough. This makes the current recovery the weakest on record.”

“The overall picture still shows a very moderate recovery in economic activity,” analysts at XP Investimentos wrote in a note to clients.

The election of the polarizing Jair Bolsonaro last year was the message Brazilian voters communicated to the world that anti-establishment was in and traditional politics was out. However, now the real work begins and investors of Brazil-focused ETFs will be keeping a watchful eye on the early months of Bolsonaro’s presidency.

Bolsonaro inherited a bevy of problems he must address during the course of his presidency and the faith of Brazil’s populace will hinge upon his success. Of course, Bolsonaro’s biggest task is to help extract the country from its current economic doldrums, but his election is perceived by market experts as one that leans toward the benefit of the country’s capital markets and the latest appointment of Campos to head the central bank alludes to such.

One of the tall tasks Bolsonaro is facing is stiff resistance in Congress for his tax reform and privatization policies. Those political uncertainties remain when investing in Brazil.

“A solid improvement in economic growth will not be seen until the last quarter of 2019, and growth in 2020 could be compromised as well,” added Carvalho.