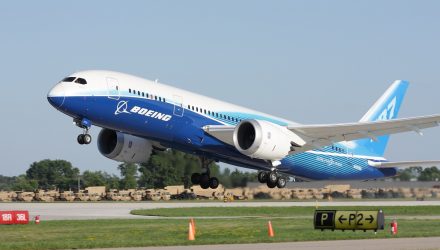 Boeing has been closely watching the ongoing U.S. trade war with China, as heightened tariffs have urged the company to slash production of its 787 Dreamliner aircraft until either an exception or a resolution is found.

In its most recent earnings release, Boeing said that beginning around the end of next year, the aerospace giant will decrease monthly production of 787 aircraft to 12 per month on account of “the current global trade environment.” The diminished production numbers will last at least through 2022.

“We also continue to monitor and inform the U.S.-China trade discussions,” CEO Dennis Muilenburg said on a shareholder call, adding that “we remain hopeful that airplanes will ultimately be part of the trade solution,” he continued.

President Trump’s trade war has been difficult for many U.S. companies that export to China, with industries from software to cars to agriculture and more suffering from the protracted tariffs. Muilenburg noted that the U.S. “aerospace industry is the largest exporter” to China, adding about $80 billion in trade surplus per year. While Muilenburg anticipates that Chinese demand for aircraft will increase in the future, Boeing does not see that demand coming in right now.

“In the near term, as we have shared, the U.S.-China trade situation has presented challenges for our wide-body production plans,” Muilenburg said. “The lack of orders from China in the past couple of years has put pressure on the production rate.”

The aerospace company predicted last month that China will require 8,090 new airplanes over the next 20 years, worth nearly $1.3 trillion in all. “China clearly needs lift capacity,” Muilenburg said, but the trade war means “we don’t have any firm orders from China at this point.”

Investors looking to partake in the aerospace industry and Boeing’s predictions using ETFs can look into the iShares U.S. Aerospace & Defense ETF (ITA).