You are at:Home»Leveraged & Inverse Channel»Are Investors Developing an Appetite for Gold Once More? 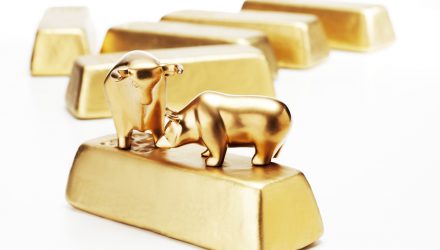 Are Investors Developing an Appetite for Gold Once More?

While Fed officials are keeping rates steady for now, the pressures of inflation and the potential for rising rates are keeping metals investors on their toes.

“As expected, the policymaking Federal Open Market Committee unanimously left its benchmark short-term borrowing rate anchored near zero,” a CNBC report said. “But officials indicated that rate hikes could come as soon as 2023, after saying in March that it saw no increases until at least 2024.”

Whether bullish or bearish on gold, traders have a pair of Direxion options to play either side.

The Option for Bulls

For those with a bullish sentiment, there’s the Direxion Daily Gold Miners Bull 3X ETF (NUGT). NUGT seek results equal to 200% of the daily performance of the NYSE Arca Gold Miners Index, which is comprised of publicly traded companies that operate globally in both developed and emerging markets.

“The price of gold per ounce has been climbing back up in the past several months, due to a variety of factors including COVID-19, central banking activities, and increased demand,” a Direxion blog post said. “Starting in early April, gold per ounce rose from its 2020 tumble and has continued the positive trend.”

The Option for Bears

Gold bears can turn to the Direxion Daily Gold Miners Index Bear 2X Shares (DUST). DUST seeks daily investment results before fees and expenses of 200% of the inverse of the daily performance of the NYSE Arca Gold Miners Index.

Like NUGT, the fund invests in swap agreements, futures contracts, short positions, or other financial instruments that, in combination, provide inverse or short leveraged exposure to the index equal to at least 80% of the fund’s net assets. The index is a modified market capitalization weighted index comprised of publicly traded companies that operate globally in both developed and emerging markets, and are involved primarily in mining for gold and, to a lesser extent, silver.

“On the other hand, employment numbers and the overall economic outlook for the United States and other countries around the globe appears to be getting better,” the Direxion article added. “Combining this with the possibility of central banks cutting down on inflation could lower the price of gold moving forward. Additionally, the price of gold has not gone up as much as some other commodities, which could point to less investment enthusiasm in the short term.”