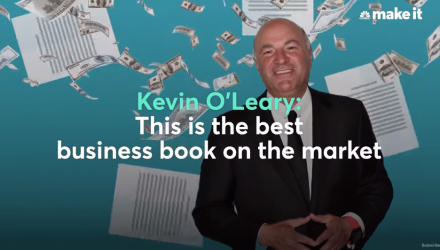 CNBC’s “Shark Tank” judge and Canadian businessman Kevin O’Leary certainly understands what’s needed in order to be a successful entrepreneur. After launching Softkey Software Products in 1983, building up the business in his basement O’Leary then sold it 16 years later to Mattel Toy Company for $3.7 billion. He currently is also the chairman of the O’Shares ETFs he founded.

People ask the Shark Tank judge and millionaire entrepreneur for his advice on which business books to read all the time, he says. The iconic business mogul’s answer is surprising however. Rather than recommend a Warren Buffett, Bill Gates, or Elon Musk biography, the usual suspects one might imagine O’Leary would favor as fodder for would-be investors, instead he opts for an unlikely character: Keith Richards, as he explained on a CNBC interview.

While the choice might seem surprising, on another interview on CNBC, O’Leary explained that as a young man he dreamed of becoming an artist: a professional musician or photographer. His stepfather however, saw that O’Leary would struggle to find success in those fields and instead exhorted him to look elsewhere for his future.

Most know Richards from his iconic role as one of the Rolling Stone’s key guitar players, complete with debauchery and drama. But regardless of his checkered past, it is undeniable that Richards has accomplished a lot.

According to ultimateclassicrock.com, “As one half of the fabled Glimmer Twins, Keith Richards doesn’t make many solo albums. Still, it could be argued that one of them helped save the Rolling Stones. His gold-selling ‘Talk is Cheap’ LP arrived in 1988 as the Stones were at a low ebb, and sparked Richards’ first-ever solo tour. Not long after, Richards reunited with a suitably impressed Mick Jagger, though a second Richards project followed in 1990. Richards also moonlighted with Rolling Stones bandmate Ron Wood as a member of an all-star late-’70s group called the New Barbarians, and on some of Wood’s albums. More recently, Richards has taken up acting as part of the ‘Pirates of the Caribbean’ movie franchise. A 1978 solo version of ‘Run Rudolph Run’ remains a holiday staple on classic-rock radio stations.

O’Leary ponders, “What does a rock ‘n’ roll guy have to do with business. He learned how to deal with life in unique ways, even in the good times and the bad times. And if you’re interested in business you can learn a lot from the way he led his life.”

One thing that O’Leary points out about the book that makes it unorthodox is that he is a rock star, but yet garnered great success. Much of his accomplishments were attributed to his persistence and goal setting, according to O’Leary, two values the entrepreneur also admires.

O’Leary explains, “That’s the best business book on the market. I know that sounds crazy. Check it out.”

For more trending news and video, visit our Trending page.