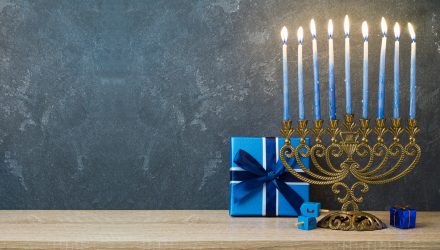 Keep the Menorah ‘LIT’ With This ETF

The Global X Lithium & Battery Tech ETF (NYSEArca: LIT) derives its performance on a lithium industry that relies heavily on the electric vehicle market and its ability to gain wider adoption by prying away motorists from petrol cars.

In 2017, electric vehicles accounted for 1.7% of all vehicle sales globally, surpassing the million marker for the first time and rising at a 51 percent clip year-over-year. A confluence of increasing demand and regulatory changes could spark more growth for electric vehicle adoption, which will benefit LIT.

A peek inside LIT’s holdings show 33 stocks–several of which are directly engaged in lithium mining. As lithium supply resources become scarce, these stocks could be looking abroad to appease demand for the commodity.

For example, in parts of the world like Argentina, lithium could be a key driver in jolting their economy back to life after dealing with a combination of recessionary pressures and a battered currency. According to a Bloomberg article, the country is experiencing a lithium boom, which could help resuscitate its economy with an influx of capital investments and job creation.

With two mines in production and over 60 projects in the developmental stages, Argentina is poised for a lithium boom based on data from the Economic Intelligence Unit. Furthermore, investment in lithium projects have increased exponentially over the last five years–a welcome sight for current Argentina President Mauricio Macri, who has been a strong proponent of a pro-market regime.

“Under the Macri administration we are seeing progress that will attract long-term investors in the lithium mining industry,” said Fiona Mackie, regional director of Latin America and the Caribbean at the Economist Intelligence Unit.. “Argentina is in a Goldilocks situation where it might have got the regulation just right, plus huge resources of lithium in a context of growing demand.”