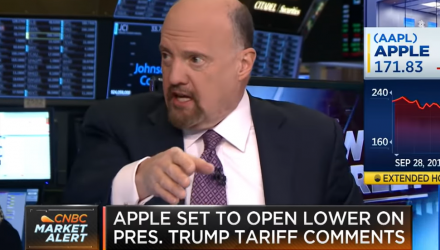 The G-20 Summit in Buenos Aires this Friday could ignite the comeback the stock market needs, according to CNBC’s “Mad Money” host Jim Cramer, especially if a meeting between U.S. President Donald Trump and China president Xi Jingping materializes into something positive.

Tech giant Apple, in particular, would like to see a favorable result from the meeting. The iPhone maker’s shares have already been depressed by a spate of analyst downgrades as the gloomy outlook for future sales dampened investor confidence with analysts citing higher unit prices as a futile attempt to curb the eventual loss in sales.

The tech giant’s shares got battered again when President Trump mulled the idea of a 10% tariff on iPhones and laptops imported from China.

“Maybe. Maybe. Depends on what the rate is,” said President Trump in an interview with The Wall Street Journal. “I mean, I can make it 10%, and people could stand that very easily.”

November’s early post-midterm election rally was short-lived as the volatility that roiled investors in October spilled over into November, prompting Jim Cramer to call it “one of the worst times in a long time.” The FANG (Facebook, Amazon, Netflix, Google-Alphabet) stocks have been on a downward spiral amid third-quarter earnings season, falling as much as 10% from their top-of-the-world 52-week highs.