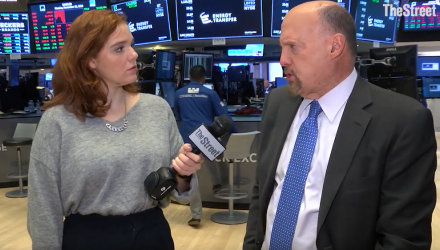 Jim Cramer: Markets in ‘One of the Worst Times in a Long Time’ as Yields Rise, Stocks Fall

November’s early rally as a result of the midterm elections was short-lived as the volatility that spooked investors in October returned to haunt investors again as the Dow Jones Industrial Average fell by as much as 500 points on Monday while Treasury yields rose higher, prompting financial market guru and CNBC “Mad Money” host Jim Cramer to call it “one of the worst times in a long time.”

“This is one of the worst,” Cramer said as words weren’t minced when he told TheStreet his thoughts on the current state of the market.

It was a pre-Thanksgiving treat that investors didn’t want to digest as technology names like Nvidia, Align Technology Inc and Salesforce.com contributed to declines of almost 30% combined as tech continues to face the brunt of volatility. From an overarching standpoint, Cramer was quick to asses all the negative news flowing from tech seeping into the capital markets.

FANG (Facebook, Amazon, Netflix, and Google-Alphabet) continued their woes while another tech giant often mentioned with the FANGs, Apple, continued to slide. The iPhone maker has been depressed by a spate of analyst downgrades as the gloomy outlook for future sales dampened investor confidence with analysts citing higher unit prices as a futile attempt to curb the eventual loss in sales.

“Apple is hard because you don’t how much they knew and how much they don’t know about their weakness,” said Cramer. “We know that the install base is fantastic, maybe they screwed up on the different iterations. My understanding is that the business is strong, but these story lines are so negative.”