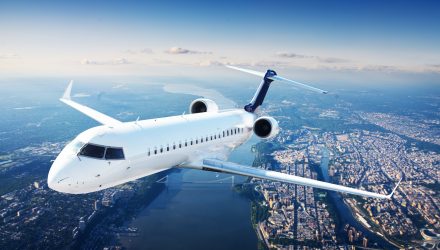 AAL stock surged roughly 25% following the news, amid already growing optimism over reopening the economy and anticipation of vacation and travel during the summer, if permitted.
The airline anticipates it will have roughly 4,000 flights on the most packed days, up from 2,300 in June, said Vasu Raja, American’s senior vice president of network strategy. The July figure is close to 40% of capacity a year earlier, but still higher when compared with 30% in June, the airline said Thursday.
“People are hungry, eager to get back into the economy,” Raja said in an interview. “We feel a real confidence to fly a much bigger July.”

American’s stock rally was the most dramatic on the S&P 500 Index and set off a broader industry rally, with the United Airlines Holdings Inc., Delta Air Lines Inc., and Southwest Airlines Co., all jumping as well, catalyzing a move in the U.S. Global Jets ETF (JETS), which gained more than 9.5% Thursday.

American’s load factor, or the average share of seats filled per plane, advanced to 55% last week from 15% in April. In July, the company will place back in service some of the 450 jets it stowed during the precipitous decline in flying but is uncertain as of yet which aircraft it will utilize, planning to fly 40% of July 2019 capacity.

The airline is augmenting the number of flights from New York City, Los Angeles, and Washington, and adding flights from its Dallas Fort Worth and Charlotte hubs amid expected interest from eager travelers who have put plans on hold for the coronavirus. It is also increasing flights to key cities in Florida, Gulf Coast cities, and mountain destinations as national parks and outdoor recreational spaces reopen.

“We planned to take our granddaughter to New York City for her 13th birthday — Broadway, museums, sightseeing, shopping, eating. She has been so excited about this trip. We were anxious about going because we are in the “older” category and were being told to avoid crowds. Fortunately, New York made the decision for us and made it easy to cancel everything and get refunds. It’s been a real class-act response. We hope we get to make this trip up to her in the near future and wish the people in New York who will be affected by the economics of having to close will be up and running and healthy again soon,” explained Karen Loewenstern, and eager traveler.

Yet, even with the encouraging signals at home, the domestic recovery is “tenuous,” Raja said. The Fort Worth, Texas-based company is still shutting down more than 100 aircraft, including three separate fleet types. And Wall Street expects a complete recovery to take years for the airline industry.

“Air passenger demand will remain severely depressed in 2021,” Moody’s Investors Service said in a report. Flying “will not see a substantial recovery before 2023.”