For Abe and the LDP, North Korea’s provocations couldn’t have come at a better time, cementing public opinion for Abe’s nationalistic foreign policy. He now has a mandate to continue his pro-growth ‘Abenomics’ economic plan, and will likely to be the leader welcoming the world to Japan at the 2020 Olympics. Importantly for the stock market, this may also mean stability at the Bank of Japan when Governor Kuroda’s term is officially up in April 2018. We are taking this opportunity to refresh investors on why RiverFront remains overweight Japanese equities in our asset allocation portfolios relative to our composite benchmarks. 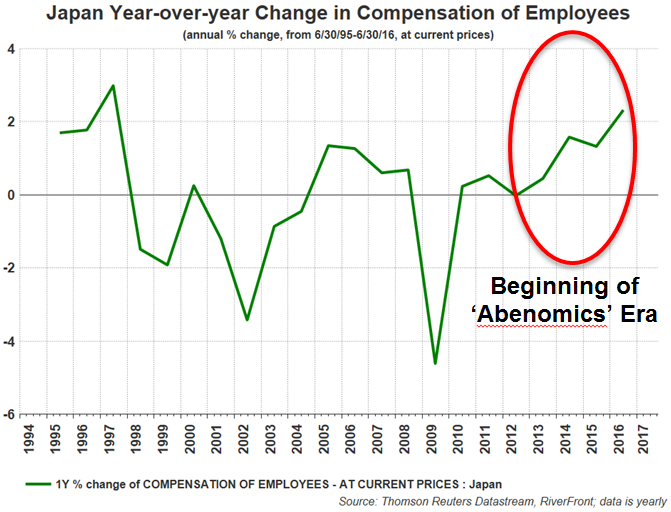 Five years on, it’s probably worth taking a step back and reviewing the performance of the controversial “Abenomics’ plan. Critics of Abenomics focus on the failure to achieve the Bank of Japan’s 2% inflation target. They also highlight that economic growth in Japan has remained relatively low, and wages appear stagnant.

Underneath the surface, however, we think that Abenomics deserves more credit, particularly from the perspective of equity investors. While we haven’t yet seen the definitive end of the disinflation that has characterized Japan for much of the past three decades, we believe we are now starting to see the ‘virtuous cycle’ of rising incomes, spending, and investment that many hoped for when Abe was first elected. There are myriad ways to look at Japanese wage data, with various conclusions. We think that the chart above, looking at the overall change in compensation from year to year, cuts through the shorter term noise and shows to us a clear upward trajectory since Abe took office. This is commensurate with other positive indicators such as tight labor markets and low unemployment. From a consumer standpoint, we are encouraged by consumer confidence and lending. The Japan All Household Consumer Confidence Diffusion Index recently improved on a monthly, quarterly and year-over-year basis. Also, lending growth to the private sector recently hit 5%, the highest growth in over a decade (source: NDR research).

It’s not just about the domestic economy; in our opinion, Japan’s corporate sector is one of the most globally-sensitive in the world. Thus, the synchronized global economic growth we’re witnessing in areas like the US, Europe and China have also led to improved corporate sentiment in Japan. This has resulted in a Japanese economy that has entered into one of its most stable periods of growth in quite some time. GDP has grown for six quarters in a row, and indicators of business confidence are at multi-year highs. A widely followed business sentiment index, the Tankan Business Conditions Survey for All Enterprises, recently hit 15.0, a high for the index since the mid-1990s (source: NDR research).

ABENOMICS HAS BEEN A WIN FOR EQUITY INVESTORS

Most cogently for stock investors, earnings momentum has been moving higher, following improving economic sentiment (see chart, below). Corporate earnings have hit all-time highs in 2017, helping boost the Nikkei 225 to a new two-decade high. While some have posited that Japan’s earnings rebound in the Abenomics era has been all about the weak yen, we don’t think that’s true today, considering the yen has been stuck in a volatile trading range for most of 2017. 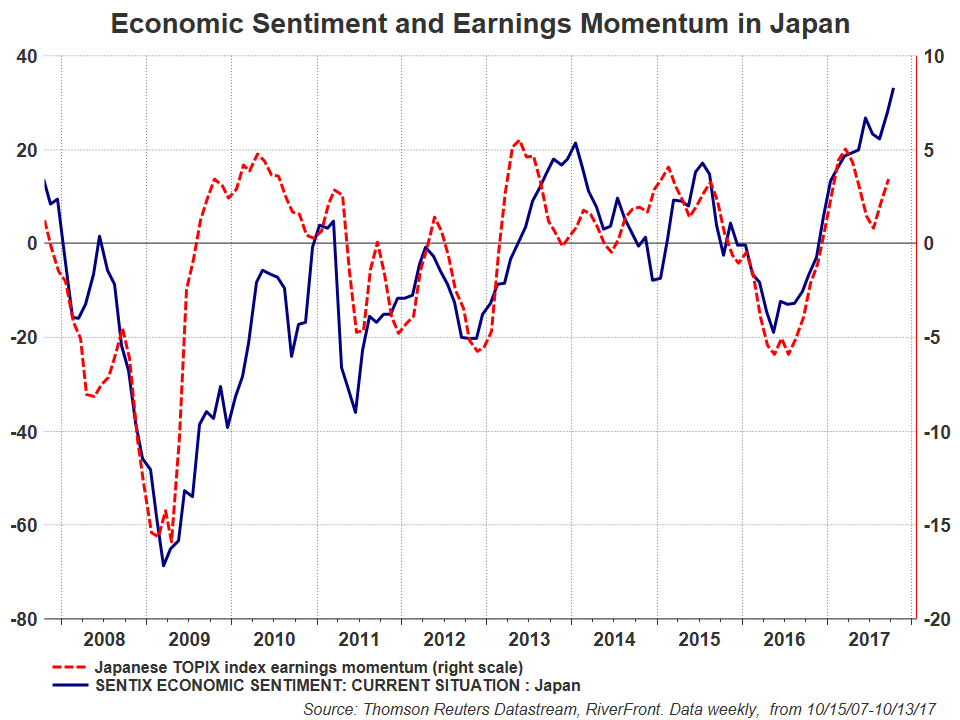 BUT WHAT ABOUT JAPAN’S STRUCTURAL ISSUES OF DEBT AND DEMOGRAPHICS?

We acknowledge Japan’s high debt levels and challenged demographics as an issue; however, we offer a couple alternative ways to think about it. In Japan, the vast majority of its debt is owed, in a sense, to ‘itself’; Japanese intermediaries own most of Japan’s total debt outstanding. This is a meaningfully different dynamic than, for instance, an emerging market economy who owes a lot of money in foreign currency to other nations. We think this gives Japan much more flexibility than other debtor nations in in how they can deal with their own debt load.

In our opinion, demographics ‘matter’ for stock investors insofar that they impact the productivity of corporate earnings. To us, it’s more about the number of able-bodied, productive adults in the workforce than it is about the birth/death rate. To this end, Japan is improving by choosing to focus on a highly educated demographic that is currently underrepresented in the labor force – women. Japan is the only country in the OECD to grow female labor participation over a percentage point a year each of the last five years, and now boasts a higher percentage of women between ages 15-64 employed in full and part-time work than in the US, at 66% (source: Goldman Sachs, May 2016).