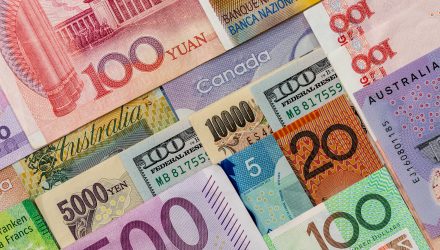 While many other Asian currency have depreciated against a stronger U.S. dollar, the Japanese yen and currency-related exchange traded fund have bucked the trend and eked out a positive return this year.

The Invesco CurrencyShares Japanese Yen Trust (NYSEArca: FXY) has gained 1.2% year-to-date, with the JPY now trading at ¥110.64 against the dollar

The yen has appreciated partly due to a slight shift in the Bank of Japan’s policy and partly because the relatively safe-haven status of the currency has helped attract defensive bets in light of uncertainty over trade and global growth, reports Joanne Chiu for the Wall Street Journal.

The yen has appreciated 1.5% against the greenback this year, compared to a 4.7% decline in the Chinese yuan, and a 5% drop in commodity-sensitive Australian dollar and the trade-reliant Korean won.